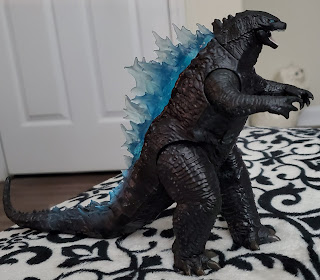 I've not been covering Playmates Godzilla vs Kong toys here much for no particular reason. So I thought I'd do something about that as I have some and plan on buying more. With the movie's release date changed again (I fucking swear...) it seams like a good time.

I've talked about Playmates general Godzilla line here before and have been pretty positive about it. This isn't the same line, it's literally an action figure line. Not soft or hard vinyl, action figures similar to the Godzilla toys Trendmasters produced in the 90's. I can only hope these guys get Cyborg Armor too. That'd be freaking amazing. *cough*

As you can probably guess the line has multiple versions of Godzilla and Kong in it. There's also a few other kaiju from the Monsterverse thrown in for good measure. Today I'm talking about the Godzilla with Heat Ray figure. I first typed 'hat' instead of ;'heat' and now I really want to see Godzilla with a hat ray. 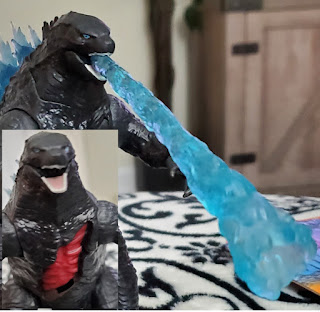 This figure is from the standard assortment (there's a giant/mega size class as well) and might be the same mold as the Godzilla with Radio Tower figure. I don't have that one yet, but it looks like it is. The difference would be the paint job and included accessory.

This figure has a much darker skin with super nice looking translucent blue back plates. He comes with a 'heat ray' burst of flames meant to represent his atomic breath. The 'heat ray' part is the same colored plastic as the back plates, which looks nice. Clearly Godzilla is charging up that blast.

His mouth is articulated to open or close. Obviously when inserting the 'heat ray' piece, you'll need it open. It doesn't just prop up in there either. There's a little ball joint that inserts into his upper mouth. Usually these companies bullshit that kinda of thing, so I found the insertion point pretty nice.

The figures in the standard range have removable battle damage similar to older Jurassic Park toys. Just a satisfying chunk of meat that can get ripped off exposing the gore underneath. The chunk is a rubbery piece that snaps into place pretty well and doesn't fall off easily. Godzilla is reasonably articulated. Head swivels, half the tail is on a ball joint (has to be snapped on after opening package). Legs move at his hips and arms on shoulders for tearing high tension wires down.

No matter who makes the figure, you can only expect so much articulation on a Godzilla toy. Anything over that is a plus. It's a good figure, I can't really find any faults with it. For all the negativity I've seen in kaiju groups on the Playmates Godzilla toys, I've been steadily enjoying them. Each his own I suppose. The line is exclusive to Walmart here in the states. I kinda love it.