King Hiss Will Punch You With A Snake Bite 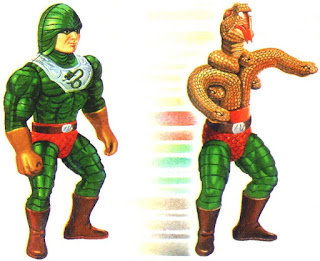 I've made several jokes about He-Man fighting living Halloween decorations and Eternia being a constant freak show. Here's King Hiss. King Hiss is the leader of the Snakemen and pure nightmare fuel. One moment he's standing before you, a dude in weird armor. The next... A GIANT PILE OF FUCKING SNAKES... WITH LEGS.

King Hiss and the Snakemen came around later in the line. Clearly intended to take Hordak's place as the new badass other faction for He-Man to deal with. He wasn't featured on the cartoon until the 2002 series, but got a healthy amount of coverage in the mini comics and other media. Mattel was clearly putting their eggs in the Snakemen basket. I guess none of them were from farms.

As a toy, King Hiss was similar to a Transformers Pretender in that he had a removable outer shell. It encased the upper body of the figure with the arms snapping on separately. When it was time to kick the battle into full gear, King Hiss could transform into his true reptilian form by taking off said shell parts to expose his weird body of giant snakes... with legs. In human form he carried a snake staff (which most Snakemen had) and a shield. In snake mode he could hypnotize his foes and attack him with a GIANT BODY OF SNAKES... WITH LEGS. Know what's worse than getting punched? A snake bite. Think about getting punched by a snake bite. Damn. Why does he have snake heads for fists? Because fuck you, that's why.

King Hiss is from a race of space snake people who came to conquer Eternia. Because Masters of the Universe. He-Ro and Eldor defeated him and then trapped him in a limbo like dimension. Around a thousand years later, Skeletor freed him and the two teamed up to defeat He-Man. Of course once this was done, the alliance would be over and then one would kill the other. This is all assumption because He-Man just kicked their asses as usual. In the 2002 cartoon he's not to dissimilar, just falls under that shows general vibe. However he does take over as the main villain, which is what Mattel was clearly aiming for in the 80's. When the line was shifting to the 'Powers of Grayskull' spin-off/hail mary, it was taking place on prehistoric Eternia where King Hiss was the central villain. I guess it does make sense that the guy who lives in Snake Mountain be a GIANT PILE OF FUCKING SNAKES... WITH LEGS. 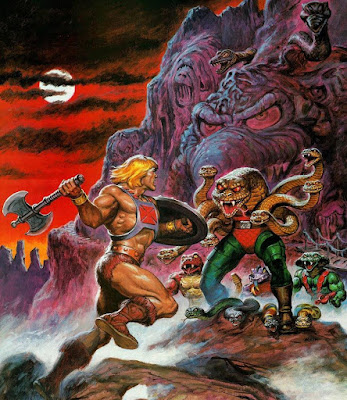