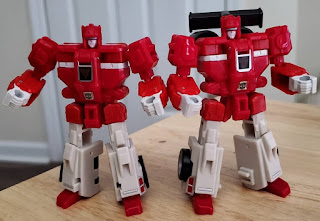 Another of the Christmas gifts from my wife was the super cool Autobot Clone 2 pack exclusive to Amazon, otherwise called the Biosfera Autobot Clones. The name is due to the Autobot Clones going to Planet Biosfera to search for Energon and end up fighting the Decepticon Clones. If it was a wrestling match, Jim Ross would say "I can't tell which one's which" a million times.

I haven't made it very clear, but I've always really liked the Clones. Something about identical robots that turn into different alt modes. It just triggers me in a positive way. I really wish there was more of them, they're neat. In a line full of repaints, specific ones that seemingly mock the repetitive nature of the line itself as a play gimmick is kinda awesome. It's like when you shoot somebody a bird, but do that cranking motion first.

When it comes to G1, it's the post movie era I like the most. Between the space opera and far out ideas is some really neat stuff. Not to mention, there's that point where Decepticons clearly focus on more monster based alt modes with the Autobots holding the line. It's the basic super robot formula with that special something that makes Transformers it's own thing. If you've looked around the site a little, it might be pretty obvious as to why it's something I'd like.

While I super enjoy the wild colors Decepticons tended to have at the time, the more traditional colors worn by the Autobots manage to look pretty far out somehow. Fastlane and Cloudraker here are a pretty traditional mix of red and a cream/buff color with some black thrown in. By all means these are pretty plain colors. They just look extra spacey on these designs. It's a cool contrast to see these bright red heroes fighting those teal monsters.

As far as the toys go, these are really good updates as the Decepticon Clones were as well. Maybe a little better. As much as I like those far out monster and beast alt modes, they were usually pretty boxy in G1. It came with the times back then and doing an updated homage requires keeping those classic looks. I'm not arguing that, but these guys in alt mode just look a little better as a new toy. Don't get me wrong, I love the Wingspan and Pounce. Just I'm a little happier with these alt modes than those. Just a little. I have no clue how to end this post. Gonna eat a Babybel now, that's a two handed snack.