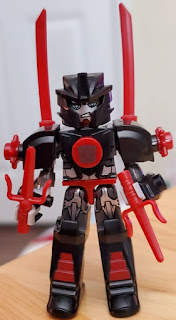 Earlier this week I talked about Armored Up Sideswipe from the Custom Kreon selection at Dollar General. Today I'm going to be talking about the Night Strike version of the toy. Which as you can see here, almost looks like a completely different figure. Something as simple as different colors can go a long way, even more so if you add a new part here or there. In this case, it's a straight repaint that just looks amazing.

As a Transformers fan, the first thought that'll pop into my mind would be G2 Sideswipe when the subject of black repaints comes up. If you mixed parts from the standard red Sideswipe kit you'd probably get a good little version of that idea. Even the facial expression screams G2 comics. However, you guys know that uncanny Microman/Micronaut resemblance I've been talking about with these guys?

In this color set, in this armor, he looks so much like Baron Karza that it's almost impossible to ignore. Like, maybe a few different parts and it would be a Baron Karza figure. As Sideswipe however, he's a straight repaint of the one I talked about earlier. So it's a good toy in another good color set. A very Baron Karza color set. 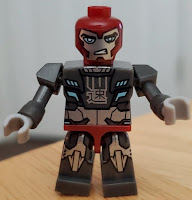