Armored Up Sideswipe And Nowhere To Go 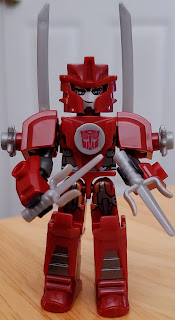 Not long ago the wife picked me up some more of those Kre-O kits that make me think of Microman. So it's going to be a accidental Microman Kreon week here on Zone Base! These fancy Kreon kits are seemingly exclusive to discount chains here in the US and so far I've only seen them at Dollar General. After taking a bit of a Kre-O break for awhile I'm admittedly a bit out of the loop on these guys. I couldn't find much info about them other than they fall under the custom Kreon class. Which I guess is as good as any for classification. If that's your sort of thing.

The line up is Optimus Prime, Sideswipe, Bumblebee, and Grimlock from the 2015 Robots in Disguise Transformers series. each figure has three different color variations. Armored up, or traditional colors. Blizzard Strike, is arctic themed. Night Strike, in black/stealth colors. You can mix and match parts for some cool color combos. Or leave them stock for a pretty good looking toy.

Like I said, I get strong Microman vibes from these guys. Armored Up Sideswipe makes me think of Flame Micro Knight and a Spy Magician. Though the toy has some character of his own as well. 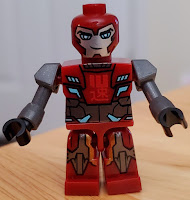 Robots in Disguise's incarnation of Sideswipe had a great martial arts flair that carries over here with katana and shuriken star armor. Not to mention the sai he carries and the kanji on his chest. The katana and sai's can be swapped out if you choose. As you can see in the pics, the base Kreon can be built up with the additional parts. This makes for a fancier robot action figure. It not only looks great, but now features additional articulation.

Kre-O was pretty addicting for me during it's time. Only when it became a discount line did my interest start to decline. The initial batches of discount toys were mostly repacks of sets I had already gotten. Add that with the spotty distribution of discount chain toys and it was pretty hard to keep up with leading to my mental disconnect. I gotten some since then, but these are the first Kre-O product I'm actively seeking out in some time.

The Microman similarities are fun, but I'm digging these on their own as well. They're just fun toys to play around with. The build is simple, really just adding a few parts onto a figure. Like most Kreons they don't Transform... but that's never been an issue for me.