Grimlock Is Armored Up And Ready 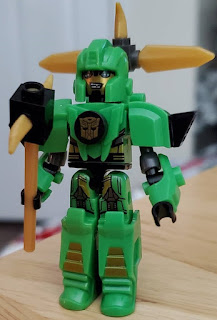 Continuing on my exploration of the Custom Kreons from Dollar General is Armored Up Grimlock! Like Sideswipe yesterday, Grimlock is from his 2015 Robots In Disguise appearance (incase you thought he looked funny). I won't mix words here, aside from the colors, I don't think he looks anything like Grimlock here. G1 or RID 15.

That being said, I do think he looks cool. The claw shaped spike armor combined with claw shaped spiked club is thematically awesome. Like most Kreons, this Grimlock doesn't transform, but still looks primitive despite being an alien robot from outer space.

The extra parts look pretty great here. Adding extra height , body mass, and articulation. It's really neat how you can take the basic Kreon figure and make a much nicer toy by snapping on parts. Like the others, Grimlock makes me think of a Microman. Cosmo Spark to be specific. As a basic Kreon, a Spy Magician MX14. 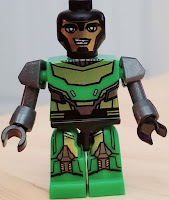