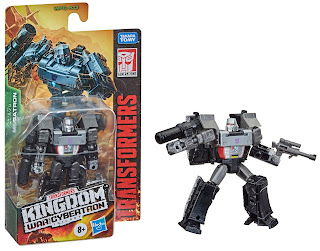 I recently received a press release with early looks at Kingdom Wave 2 toys. Since you've been bombarded with 50 million links to the same news already, I thought I'd just talk about the toys. It's what I've been doing with these things the last few times anyway. You cool with that?

Starting off, let's talk about Core Class Megatron. It's another G1 Megatron, and he turns into a tank again. That being said, he looks pretty sweet. I think the smaller size works pretty well with the design and he looks like a good toy. I don't get advance review copies, but if I did, this would be one I'd really like a look at. Like the seekers, when it's the same idea repeated often, it's neat to see what's different this time. 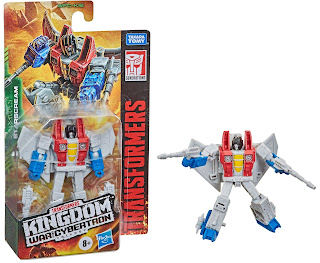 Speaking of Seekers, here's the Core Class Starscream. People can't get enough seekers and it's safe to assume this one will get a few repaints. At a small size and lower price, I'm sure building that seeker team again won't be so hard.

I'm really looking forward to getting a hold of the new Core class toys. Some folks got some already and they look like fun little figures. Distribution is pretty wonky this year and frankly I don't see a reason to pre order general retail figures. So I'll just have to be patient until I see them at my local stores to find out for myself. Also I'd like to point out spellcheck always suggests pee order in place of pre order. 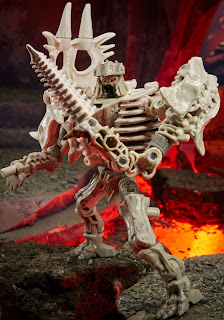 Ractonite is also setting off spellcheck as well as Fossilizer which is the type of Transformer he is. I really like the look of Fossilizers. What's not to like about a robot dinosaur skeleton? Not to mention, the human race has only seen dinosaur skeletons as opposed to actual dinosaurs. So there.

Replacing the Weaponizers... man spellcheck is having a rough day... Fossilizers break apart into weapons and armor for regular Transformers to use. Do I have to explain just how awesome that is? I mean... a robot wearing bones as armor. That's probably the most metal thing ever. Then you add in a robot skeleton that transforms into a dinosaur skeleton and my mind just exploded.

Another nice thing about Fossilizers is that they're something new. A new type of bot and new characters. The past 20 years of Transformers has been pretty slim on new characters with each series having less than the one before. It's not just new to me, it's new to you as well. They remind me of Bone Age also and that ain't bad y'all. That ain't bad. 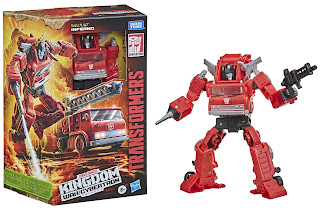 I've always liked Inferno and he's making an appearance in Kingdom as a Voyager. Just as he and Grapple have usually shared a mold, Inferno is based on the Earthrise Grapple mold. I really liked that toy, so I'm sure I'll like this one.

I wish I could tell you I like Inferno based on his character or some odd trivia like how Simon Furman kept killing him over and over. Really though, I just think he looks cool. I don't think I've ever gotten over that childhood appreciation for a big red firetruck. 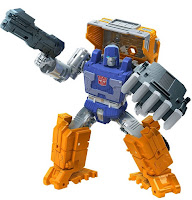 Huffer is getting a new deluxe toy in Kingdom and might I say it's really nice that he is. His last few toys were repaints of other toys, so it's nice to see a new mold. I've always liked Huffer anyway. I think we all know a whiny grumbler and would like to strangle that person. When Huffer does it for some reason it's charming.

I've always enjoyed his little orange truck mode as well. I remember as a kid my older brother had Optimus and it never occurred to me that I could own one too (kid logic). When he pulled Optimus's trailer in Heavy Metal War it blew my mind. For awhile there I figured he could be 'my' Optimus Prime since my older brother already had one.

If you couldn't get a hold of Arcee in Earthrise, don't worry, her Deluxe figure from that is getting released again in Kingdom. I haven't gotten one yet myself, so this might be how I do as well. There was a time when a figure of Arcee was just wishful thinking and those days are over. She's had a few figures by this point and this one seems the most faithful to her classic appearance.

The figures will be available April 1st 2021 (no fooling) and will be available for pre order Thursday 12/3 (tomorrow). The Core class figures have a MSRP of $9.99, Deluxes $19.99, and Voyagers at $29.99. A big thanks goes out to Hasbro and Rogers & Cowan for providing Zone Base readers with this cool news and giving me something to talk about. If you like what I do, thanks! Please share with your friends. That's all I ask. You could share with people who aren't your friends... but that'd be weird.