The Combatribes Are Good Enough

I love a good old school beat 'em up. These kind of games were the best part of an arcade back in the day. Fighting your way through hordes of bad guys before meeting the levels usually insane boss with flashy graphics and loud music blaring.

The theming of the games usually varied from post apocalyptic gang warfare to medieval fantasy. Often popular licenses would show up in the genre and those games would usually have the biggest crowds. Trust me, there's nothing better than Homer Simpson beating the shit out of a zombie. 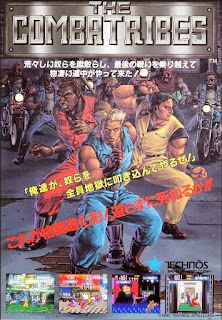 The Combatribes by Technos Japan Corp was a pretty popular game that's gotten a little obscure these days. Most people see it as the spiritual follow up to Double Dragon. That's not unfair as it's got the same look and vibe of the Double Dragon games. Beserker, the leader of The Combatribes even looks like a beefier Billy Lee.

The level layout is a little more like Renegade which Techno made before Double Dragon. Instead of a ongoing scrolling level, you generally have one large area to fight the hordes of enemies before taking on the boss. Building on the Renegade play style, some levels have more than one area of bad guys to clear out before facing the boss.

Unlike the prior Technos games, Combatribes turns the craziness all the way up. Each level you face a different street gang who matches a theme. For example, you face The Demon Clowns in a amusement park. All of the street gangs are all working under the big crime boss. However when you finally reach the final battle, he is killed by the true main villain. A cyborg named Martha Splatterhead whom you then have to defeat.

Did that sound a little crazy? That's because it is. The enemies range from bikers to cyborg army men with some roller blade punks and clowns thrown in for good measure. Facing this freak show is The Combatribes. A group former military soldiers turned street vigilantes who are also cyborgs on the SNES version. Because why not? The three members range from strong but slow, fast but weak, and the balanced leader. You have a range of martial arts moves to fight in the neon futuristic streets and can even pick up some items to use as weapons.

Some of those characters, moves and abilities are absent in the home version of the game. Another difference between versions is in the arcade your life meter is in numbers while on SNES it's a standard life bar. When you die in the arcade you're forced to continue with another quarter, but if you insert one while playing that number value on your life meter keeps going up. It's pretty fun to pump a ton of quarters in and watch those numbers rise. Technos had a great habit of putting extra effort their arcade to home conversions. Instead of simply porting it over, they'd make it fit the medium better. The original Double Dragon had a leveling up system and an additional versus mode. The Combatribes has cinema scenes to explain the story better and a versus mode as well.

The game was fairly violent as you can imagine and featured edgier characters. The Slaughter Troops gang of cyborg army men was lead by a boss named Swastika for example. That was tuned down for the North American SNES version. Blood replaced with sweat and saliva, now the Demolition Troops are lead by Master Blaster. Probably a good idea as your younger brother was more likely to play this than in the more mature arcade scene. It's still a really good game regardless of where and how you play it. 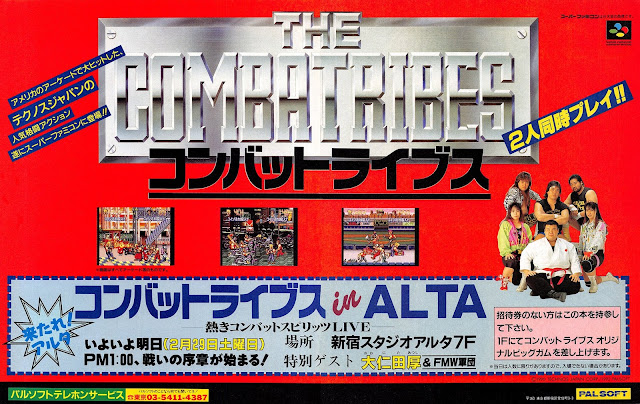