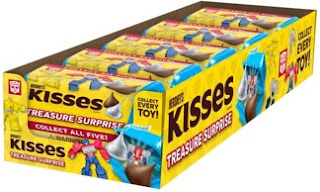 Candy with a surprise toy is a tried and true delivery system for blind bag toys. Hershey's has recently entered the arena with their new Hershey's Treasure Surprise line. For $2 (what I've been paying anyway) you get a tiny blue treasure chest with a blind packed mini figure and four Hershey's Kisses.

While a bag of Kisses at the same Walmart is about $2, it's still a candy I've always liked in the little box. Usually with these surprise things you either get some generic sugar candy that's maybe shaped like the characters or that stuff inside Kinder Surprise Eggs. It tastes great usually, but that's not the issue. If you get one of these occasionally, you'll probably eat the candy not long after. If you buy up a bunch... you're going to have a small stockpile. That will eventually get thrown away.

I still remember finding that forgotten zip lock of bubble twist gum that had went bad and melted into a weird goo. Gross. A Hershey's Kiss however tends to vanish almost instantly. If you end up with a stockpile of Hershey's Kisses, they'll get eaten. It's one of the world's most popular candies. At worst the little packs will end up in your lunch for a work time snack. I had a few from these this weekend while watching TV. 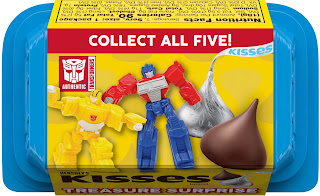 The actual reason you buy the chest is the toy. Right now these chests have Transformers and My Little Pony surprise toys. I'm trying to collect all the Transformers. You may have guessed. I was waiting to get them all before I did a post, but doing so has been a challenge. I'll probably do a post on them all once I do so. Right now I just kind of want to talk about the hunt.

Which is a mother fucker.

So far I cannot physically find the packs. What I can do is add them to my grocery order and wait for it to be delivered to see if the employee pulling said order could find them. Which half the time they can. I've tried using the Walmart app to find them in the store. So far it's taking me to everything aside from these. I do know where the motor oil is now though. I'll just have to be patient for more to show up at other stores at this rate since they haven't sent any in about two weeks.

So far I've got Optimus Prime, Starscream and Grimlock. The only other two left is Bumblebee and Megatron. At this rate it's probably going to be until they show up at Five Below before I find anymore. I must have cleared out the shelf box mine were picked from. Which resulted in a bunch of Primes, a bunch of Starscreams, and two Grimlocks. I can't tell if there's a code system or not, which would be useless right now anyway. Usually the random nature of a blind bag toy is fun... but not when you're waiting for a delivery and see that item wasn't in stock when you get your receipt email.