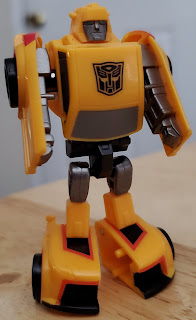 The Legends/Legion Bumblebee mold from Reveal The Shield has been re-released so many times over the past decade that I'm amazed it's still in use. I think it's run as a discount store toy has been going for a steady 6 years straight with no end in sight. I don't know who's counting, but this is probably the longest running Transformers toy of all time.

The figure gets random changes as time goes. From different releases or just whatever random reason, they'll be something different about it occasionally. That was the reason I got it again recently. In October actually, my wife was at Five Below and sent me a picture of the toys asking if I wanted anything. I spotted the Bumblebee and asked her to grab me one. It'd been a while since I'd gotten a version of it (maybe the Cliffjumper from 2015) and I was curious to see what was different this time.

If you've never had the figure, it's still a good one to get. Classic Bumblebee as you expect him updated to transform into a sporty hatchback. The toy predates the current return to VW Bug Bumblebee toys and was released during the time VW wasn't ok with their car being used. 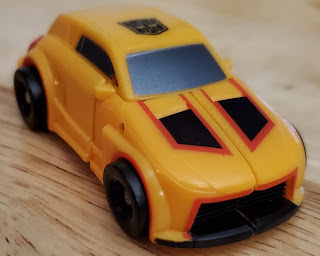 The sporty hatchback has always been a good replacement to me and kinda looks pretty similar to a Bug. This figure is pretty close in size to the original Microman toy and it's always felt like a natural evolution of it to me.

The toy itself it pretty good. He's got the basic level of articulation you'd expect from a Legion Class toy. In robot mode it looks like Bumblebee got a new alt mode on some episode and it walked off the screen.

His transformation is pretty similar to the original as well. Pull them legs up and fold those feet down. Push those arms in and fold the back over to cover the head. Classic Bumblebee. They were clearly updating the original toy. 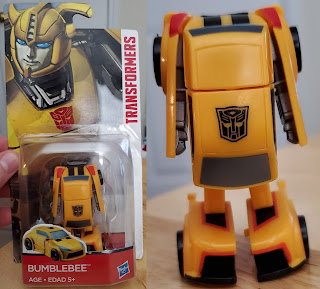 He wasn't too different from what I can remember of the last time I got this toy. Same stripes and Autobot symbol placement. The grey on his robot parts looks darker and I swear the yellow is a little too. Not enough to qualify as a new variation, but it's darker than I remember. I'm sure.

The plastic felt a little flimsy this time. Not sure if that's from mold degradation or maybe just a cheaper plastic used. Considering the toy only costs $5, I'm sure they've needed to adjust the recipe a little over the years.

They downsized the bubble on his card and MADE the figure fit inside. Bumblebee is crammed inside the packaging half transformed. At first I thought I had gotten a broken one. Apparently all of them at the store were that way... in 10 years a fan who was a kid in 2020 will make a custom Bumblebee based on this. I really look forward to it.