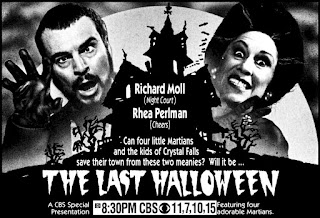 In 1991 Hanna-Barbera took a dump upon the face of released this live action/CGI Halloween special. In it a group of Martians are on a mission to gather what we call candy to bring back to Mars.

The name of the special comes from the sub plot that the towns lake has dried up. Said lake generates the local candy factory which now will have to close down. I guess nobody buys Skittles at Walmart there.

At least the lake is named Crystal Lake and I can't help but to dream a sequel where Jason exacts his revenge. Revenge for the gall of one business to try and cancel Halloween. We all know all that place only makes crappy peanut butter chews to begin with. Utter bullshit.

The Aliens also appear in Halloween commercials for Mars candy... which Mars branded candy isn't featured in the special... which likely the town was giving out instead of the factories brand to begin with... the call candy coobi. Did I mention that? It's uh... it's not good.