I watch this thing all year. I love it so. This or the 80's edition (that I also post a million times a year) would get shown to my class every year at Halloween. They'd roll in the projector and make sure us damn fool kids didn't do anything crazy Halloween night. Or get ourselves killed.

I don't think there really was much fear of any actual harm. Well, we were all afraid of a razor blade stuck in something. That was the only real worry most of us had. Parents usually checked the candy and threw out anything shady or unwrapped. But you never know.

One guy in my neighborhood always gave out donut holes. As in he had a box from Dunkin Donuts and would just throw a few in your bag. Now there's just random powdered sugar on everything. Dammit. Fortunately, I avoided the razor blades. A kid in one of the other classes had to go to the emergency room. That's what everybody said. 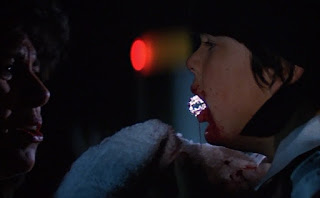 Be careful out there guys.