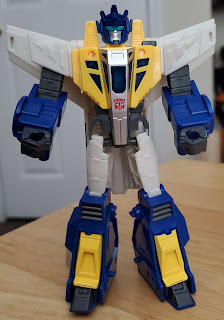 I had been looking forward to getting a toy of Meteorfire since first seeing the character. Thanks to a Target stop this weekend, I was able to find the one toy of him that Hasbro seems to be putting out. From the Battle Call series of Cyberverse figures, Meteorfire is a larger figure with electronic lights.

While being a larger figure, he's still a fairly simple toy. Arms move at the shoulders and elbows with a wrist swivel. Legs are articulated at the upper thigh and knees. His head swivels around as well.

Despite the years of plentiful articulation in Transformers toys, I still don't expect more than the basic amount. So I'm pretty pleased with his range of motion. You can't roll him into a ball or anything, but I wasn't going to anyway.

His design is just wonderful to me. Looking like a holdover from an older time of robot toys. Like something out of late Euro G1 or Operation Combination. 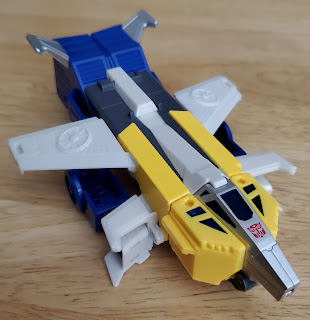 Meteorfire transforms into a really bulky jet. Not super sleek, pretty boxy. It kinda makes me think of Sky Garry a little. Not that the two jets are similar, but in that they're big bulky aircraft. With those VTOL blades on the wings, I would think he needs a little help getting that thing off the ground.

I honestly would have made him some sort of troop transport type vehicle fictionally because of this. I can't see anything else when I look at it other than him landing and a bunch of bots loading. Like Astrotrain or Galaxy Shuttle.

I just can't get any other vibe from it. I don't write Transformers fiction though. If I did, so many grammar errors. Probably more than here. But you'd know what I was saying. I think.

I mentioned the Battle Call thing earlier. It includes lights and sounds as well as some clip on armor. I'm going to talk about that now. Meteorfire was in a single episode of Cyberverse, this armor was not featured in that episode, but should have been. It's neat. 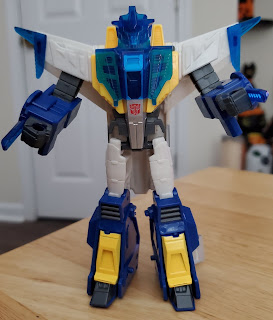 Blue and clear, the armor pegs onto the robot mode pretty easily. It gives him a pair of wrist blade things for poking. Know when you punch somebody with your middle finger out a little? Imagine if you actually did that and instead of your soon to be broken finger jutting out, it was a knife. There's also some extra flair for this wing tips and a chest piece that gives Meteorfire a face shield. Now he won't catch covid-19. It also adds to his appearance a little. There's some neat detail work there that you'll see right through instead of. That's a shame because it really is good looking.

The Battle Call gimmick works in both modes, but the armor only attaches to robot mode. It does add to the light up features a little. What's the Battle Call gimmick? You flip a switch and his lights and sounds correspond with whatever noise sets it off. They say voice activated, but I opened a Pepsi and it registered. It's neat, but doesn't really add that much to the toy. I'm sure a kid would really like it though. Considering that's who this was made for in the first place I can't be too judgemental of that.

I really like this figure. Admittedly, I could have done without the whole Battle Call gimmick. I don't hate it, I just don't particularly care for it. It's kinda just there and once again obviously not meant for me, but a child. So I'm not going to be too harsh on it. The figure? Wonderful. A chunky old school looking super robot toy. I love these accidental throwbacks that Transformers toy lines intended for younger kids deliver. He looks pretty great and is pretty fun to play around with. I'm pretty happy I found him at Target.