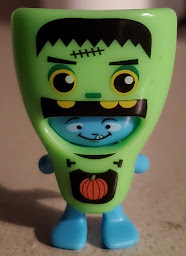 As a bling bag toy addict, I don't have to explain why I like Kinder Surprise eggs so much. The combination of random toy surprise and pretty tasty candy is usually just the thing for not a lot of money. Not just content for regular changing assortments, Kinder also jumps on holidays. When they do, they absolutely kill it. Which brings us here.

I honestly didn't think they could beat last years awesome Halloween monsters figures (which I should have wrote about... dang). They were these great little figurines with plenty of character. I was wrong, they completely out did it this year.

This years Kinder Surprise Halloween theme is amazing. Y'all ready for this? Trick or Treating mini-figures with removable glow in the dark costumes. I know, it's wonderful. I cried.

You can get the eggs individually or in a cool box set of four. The box set is themed as a little street full of houses our little gang can trick or treat at. Wanna know about something called the extra mile? You can tear each house off individually and it's got a little from/to spot on the top for gift giving. You get enough of these little houses and maybe a decorative tree or two. You've just built a neighborhood for your toys to spend Halloween night at. 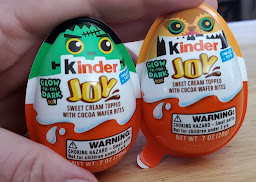 The costumes are a gallery of Halloween's greatest hits. A skeleton, werewolf, ghost, etc. The gangs all here. The costume can snap off and be exchanged with other figures too.

Each figure is in a different color and face in addition to the costumes. It's a cool little extra touch that gives the set some variety and character. They're smiling, winking, got their tongues hanging out. They really look like kids excited for a spooky night of ringing bells and getting candy. The multiple colors remind me of "Witches Night Out" also and that ain't bad. That ain't bad. 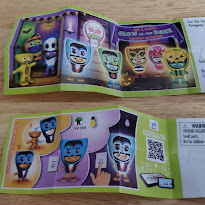 The costumes even glow in the dark. I didn't get a good picture of that, but believe me they do. Which means the kids will be safe out there while trick or treating. That's a nice extra touch in what's already a stand out toy. It's still pretty early in the Halloween season to call something the stand out of the season. If this is just the tip of this years Halloween iceberg, then we're in for a record year.