Dracula Is A Dickhead

Real talk, I love Pepsi. You might have noticed. You might have noticed I love the Universal Monsters, or even the reason we're here right now. Halloween. I love all three. For a while in the 90's Pepsi and Universal Studios had a partnership with some sort of promotion usually around Halloween. It was great. Normally you could win tickets to Halloween Horror Nights or free snacks. Pepsi products even had great clip out art of the monsters. Times were good.

The point I'm about to make isn't about the good times, it's about Dracula needing his ass kicked. I hope you've already watched the above clip. There's Frankenstein (let's not be that guy) carrying a Pepsi truck. Really struggling too. Sure he's strong, but you know that thing is heavy. As a big guy, I often get stuck carrying the heavy thing while the others just walk the fuck off. I feel your pain Frankenstein.

Then he gets to the party where everybody else is having a good time. He brings some soda and chips and what does Dracula say? "What? No dip?" Look at his face, I felt that. I FELT THAT. FUCK YOU DRACULA AND YOUR STUPID CAPE. Take your fake fancy ass down to Kroger and get some your own damn self. Fucking asshole.

What did the Wolfman bring? Weed? Great, like a small portion of the party is going to enjoy that while the rest just try to pretend they aren't uncomfortable. Meanwhile, the Phantom is really upset about it. What if the cops come? What if I get a random drug test at work tomorrow and that second hand shit makes me fail it? I have bills man! You know the Mummy brought a snack tray and everybody saw the Aldi label. He's like royalty or something. I'm not saying he should have went to Whole Foods or anything, but come on. Seriously.

Know what Dracula brought? Jack shit. He just showed up acting like Mr. Cool and everyone just loved him. He's that guy who shows up late and just takes charge after everyone has been working the whole time. Did you decide to bring everybody donuts? He's the one who's going to complain that it's not another brand. Know what, I hope Frankenstein got some dip with a lot of garlic. Fuck that guy. 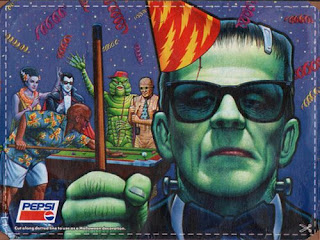