Smashdown Is An Allstar 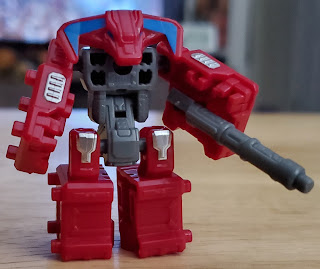 I picked Smashdown up in June shortly after moving, but just got around to opening him up. Life found a way. I was happy to get him as the Siege version never shown up in my area, so when he was re-released in Earthrise. I uh, got him. I really like Battle Masters. A nice evolution of the Targetmaster idea, where not everyone has to be a gun.

Speaking of variety, I really like it when there's variety in robot modes. Keeps things fresh. Smashdown has a bulls head instead of a standard robot one. No real reason either and I'm not complaining. He looks like a Battle Beast and I freaking love Battle Beasts. 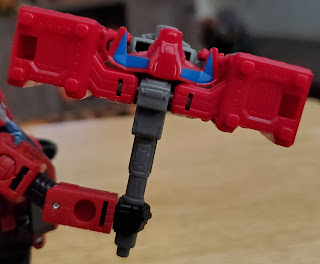 Smashdown turns into a hammer. Which seems pretty pointless in a gun fight, but so does a sword and we're all ok with those. The idea here is that he's an ideal weapon for one of The Wreckers. On the Japanese side of things, Smashdown is a type of Selector, another faction of Transformers.

Selectors are a race of Transformers created by humans using Angolmois Energy as a working class for construction needs. Smashdown is a type of Selector that turns into a hammer. Get it?

Whichever fiction you prefer, Smashdown is a great little toy.  The handle from hammer mode can be used as a gun for bot mode. In hammer mode that handle can be held by most Transformers toys in case they see some watermelons nearby.

Like most (all?) Battle Masters, Smashdown comes with a little energy special effect piece. This is to emphasize the force from a good whack from that hammer. Considering his body is that hammer, I wonder if that hurts? It's a neat little extra that I'd like to think is appreciated more by those who like to display their toys in action poses or in dioramas. Smashdown is a neat little Minotaur robot that turns into a hammer. I don't think I can find enough words to explain how great that is, it's pretty a pretty universal idea. Go buy one. 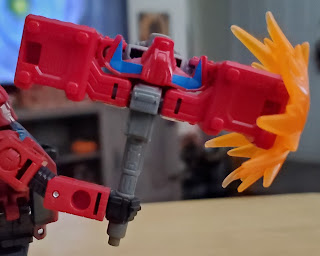