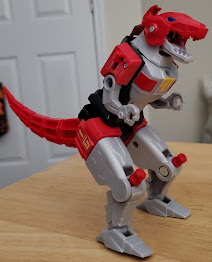 This is the Tyrannosaurus Rex Zord from the new Hasbro Dino Megazord set. Today's post was going to be all about him as a companion to my prior Zord post. Somewhere in between then and now I went to Target and got the missing set of Zords to complete the Megazord.

I already talked about the Mastodon and Pterodactyl, so I'm going to focus on the other three and the finished Megazord. I've linked to the prior post twice and it's like maybe three posts down anyway. It should be easy to find. 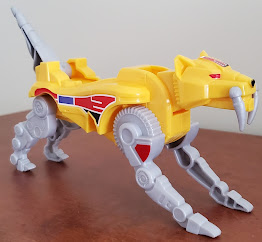 Of the five Zords, the T-Rex is definitely the nicest. He comes packaged by himself with the the power sword. Forming the bulk of the Megazord, he has the most articulation and is the biggest boi in the crew. His mouth opens to take a bite. Duh.

The legs feature a range of motion with points of articulation at the hips, knees, and ankles. This comes from the combination, but also makes for a reasonably nice toy.  His tiny arms have a small range of movement as well. If you noticed the pegs on his knees, you've probably figured out those are connector ports for the other two Zords.

Saber Tooth Tiger and Triceratops come together. The two are of similar size as they form lower legs for the Megazord. I said in the prior post that these figures are building blocks for the combined mode and it's very clear with these two. The tiger is the more elaborate in the pack. The toy has pretty limited articulation, the tail moves as does it's legs. Though they are only jointed at the hips with the actual legs being static. It's still pretty serviceable. 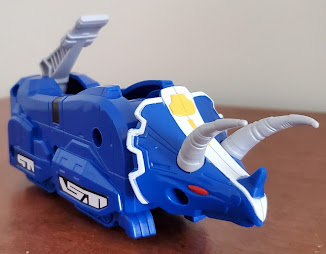 The Triceratops is practically a solid block. His tail/cannon can raise. That's pretty accurate for the Zord honestly.

When converting the two into their leg modes, heads can move into place as do other extremities. The Saber Tooth Tigers sabers also adjust to move out of the way. I don't know if this counts as articulation, unless you intend to pose them looking to the stars. Full of wonder.

The t-rex moves into combined formation pretty easily. Just straighten him a out, fold in a few parts. His chest opens for dino head storage. 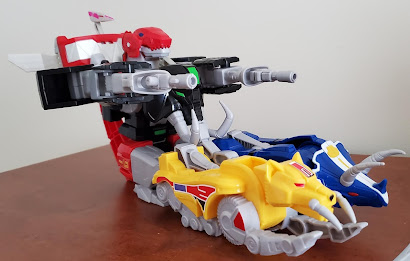 Mirroring the transformation on the show, I went for the Dino Tank first. It forms pretty naturally as it's basically the Megazord 80% transformed. I had a little trouble getting the Pterodactyl to stay in it's proper place. There's a place it tabs into on the Mastodons legs which didn't fit together well. Your mileage may vary. It's a pretty good representation of the tank. 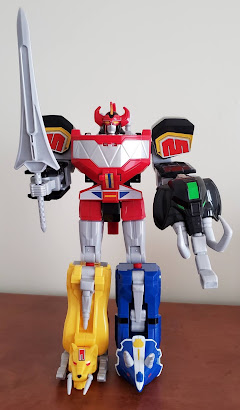 The Megazord itself is pretty cool. A decent representation of the classic design, he almost feels a little lost in time. Like they found some toy design from 1993 and put it into production. As you can see, he can hold the power sword and Mastodon head as a shield. It's an overall good looking toy based on a good looking robot.

I want to point out that in Zyuranger, the power sword is called 'God Horn'. That's the best name ever.

I've been looking forward to this all year after it was shown off at NYCC. Of course with the pandemic, this year has felt like an eternity. I guess that's why having it now feels like such an accomplishment. I swear I've aged 6 years since March.

I don't know what the goal is with this toy. It's this random classic toy made anew and sold alongside the other kid aimed Power Rangers toys. Is there more planned? I hope so, but there's no word yet. Except this one.

I'm happy with my new Megazord toy. It's nice and relatively inexpensive. I had fun getting all the sets, even if it only took two trips to Target on different days. I dig it.