I was pretty happy to luck up on a few of the Zords for the new Hasbro Dino Megazord toy. From what I understand, the set is available this way through Target with a gift set through Amazon coming soon.

I picked up the T-Rex and Mastodon/Pterodactyl two pack. I'll still need the Triceratops/Saber Tooth Tiger two pack to complete the Megazord. Hopefully they'll have that restocked soon.

I'm talking about that Mastodon/Pterodactyl set today. I got the two Zords together for $14.99. The Mastodon is pretty big and it'd be pretty easy to overlook the Pink Ranger's Zord on a first glance. Make no mistake about these new toys, they're not high end collectors pieces. These are comparable to the Beast Morphers standard toy line and in similar packaging.

It's weird to see a nearly 30 year old Megazord next to this years model, but I'm not complaining. I can appreciate having older characters available at a lower price. I hope other older Megazords follow in this format. I'd love a Dragonzord to combine with this set. A Titanus or Thunder Megazord would be great. 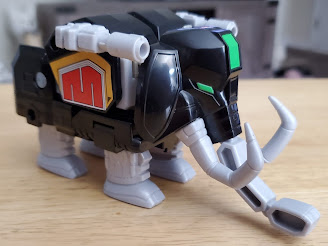 By themselves, these are pretty basic toys. The pterodactyl has always felt a little shoehorned to me. It's the Megazord's chest piece with wings and a head and there's no hiding that here. It's a serviceable toy of that without any bells or whistles.

The mastodon is a bulky robot with plug in cannons. These two may seem pretty limited and by themselves they are. They're building blocks for a combined form and don't make any apologies about it. Being pretty faithful recreations of the original design, there's a lot to love about holding such an old school robot toy. If that's your thing.

The mastodon forms the arms of the Megazord and and turrets for the combiners tank mode. Unfolding him for this is easy enough, but be careful. I found myself nervous that I was about to tear the toy apart due to parts not opening up. A pesky connector just didn't want to let go, so don't go yanking on yours carelessly. You could end up breaking your robot elephant.

In all they're pretty faithful new toy of an old robot. I've seen complaints about how basic the toy is, which I guess is fair. Most would assume a vintage design would get a more premium toy. It's not a very elaborate set. Like I said, I'm all for a lower cost version. Toys are overpriced enough as is, and I like the simplicity of older robot toys. So picking up some new old toys is fun for me.