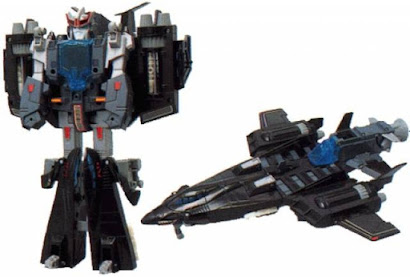 Conquest is made of the ashes of one's enemies.

Starscream is ruthless, cold-blooded, and cruel, yet considers himself the smartest, most sophisticated Decepticon of all. He believes Decepticons should rely more on guile and speed rather than brute force to defeat the Autobots. He's a powerful air commander who can reach speeds of mach 2.8 at an altitude of 52 miles, even while flying heavily armed with his heat seeking, air-to-air missiles.
Posted by Rob at August 22, 2020