Top Gun X Transformers Is Playing With The Boys 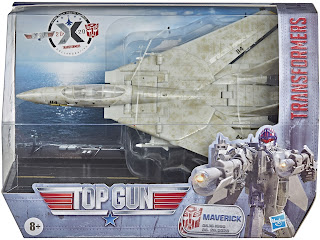 After more than thirty years of service as one of the Navy’s top aviators, Pete “Maverick” Mitchell (Tom Cruise) is where he belongs, pushing the envelope as a courageous test pilot and dodging the advancement in rank that would ground him. When he finds himself training a detachment of Top Gun graduates for a specialized mission the likes of which no living pilot has ever seen, Maverick encounters Lt. Bradley Bradshaw (Miles Teller), call sign: “Rooster,” the son of Maverick’s late friend and Radar Intercept Officer Lt. Nick Bradshaw, aka “Goose.” Facing an uncertain future and confronting the ghosts of his past, Maverick is drawn into a confrontation with his own deepest fears, culminating in a mission that demands the ultimate sacrifice from those who will be chosen to fly it.

TRANSFORMERS Autobot MAVERICK stands at 7 inches in robot mode and can convert from robot to classic Northrop Grumman F-14 Tomcat® jet mode in 25 steps (The F-14 Tomcat is a registered trademark of Northrop Grumman, and is used under license). He includes a screen-inspired miniature motorcycle accessory and 2 alternate hands that can hold the included volleyball accessory. This bot is always ready to go vertical in jet mode or dominate a slow-mo volleyball montage in robot mode. This MAVERICK robot figure also features folding jet wings, movie-inspired details, including a helmet design inspired by the 2020 Top Gun: Maverick film, and includes 4 missile accessories that can be mounted on figure’s arms in robot mode and under wings in jet mode. Even the packaging is inspired by the aircraft carrier!

TRANSFORMERS robots have always been more than meets the eye, but now, through the TRANSFORMERS Collaborative, fans can experience these larger than life characters as they team-up, mash-up, and meet up with other characters, teams and people who share this same special quality. It is a world of constant change where things are not what they seem.

The MAVERICK figure is available now for pre-order at HasbroPulse.com, while supplies last 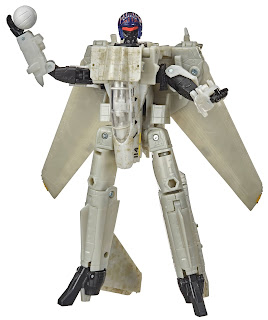 About Hasbro
Hasbro (NASDAQ: HAS) is a global play and entertainment company committed to Creating the World's Best Play and Entertainment Experiences. From toys, games and consumer products to television, movies, digital gaming, live action, music, and virtual reality experiences, Hasbro connects to global audiences by bringing to life great innovations, stories and brands across established and inventive platforms.  Hasbro’s iconic brands include NERF, MAGIC: THE GATHERING, MY LITTLE PONY, TRANSFORMERS, PLAY-DOH, MONOPOLY, BABY ALIVE, POWER RANGERS, PEPPA PIG and PJ MASKS, as well as premier partner brands. Through its global entertainment studio, eOne, Hasbro is building its brands globally through great storytelling and content on all screens. Hasbro is committed to making the world a better place for all children and all families through corporate social responsibility and philanthropy. Hasbro ranked among the 2020 100 Best Corporate Citizens by 3BL Media and has been named one of the World’s Most Ethical Companies® by Ethisphere Institute for the past nine years. We routinely share important business and brand updates on our Investor Relations website, Newsroom and social channels (@Hasbro on Twitter and Instagram.)

Thanks to Rogers & Cowan  for providing Zone Base readers with this news!