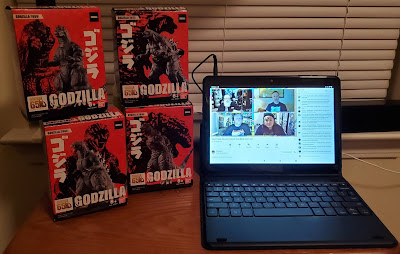 To explain Kaiju Con.Line, it was a free virtual kaiju convention organized by Kyle of Kaijucast. There was no G-Fest this year because of covid-19, so Kyle organized a bunch of live streaming panels, and other online activities under the banner of Kaiju Con.Line to give fans of rubber suited monsters something to do this weekend in place of the annual gathering.

It was pretty nuts as there was not only the various live stream panels, there was watch parties all over the place. Either affiliated or other groups running their own thing. Not to mention Tsuburaya ran an Ultraman stream and Shout Factory ran a Kamen Rider stream all weekend. There were a million discord chats and various online vendor rooms to buy from dealers in name of the weekend. I've got a t-shirt for the event on the way from the official store, because I needed to support this. It's great when fans come together to do something positive.

As I've said a million times before, traveling to conventions is getting harder for me to pull off. A state or two over is one thing, across the country... dude. So I've been wanting something like this for awhile. That way I can participate while still handling my home and work life. This literally was a breeze. I've mentioned before that I work at night. Because I do. So when I got off work Saturday morning, I had some things to do. While shopping at these stores I would pop in and check in on con stuff. I've went to stores during a con before, but I've never bought mulch while at a con before.

During these errands I picked up some of the Bandai Godzilla 65th anniversary sofubi boxed figures I've been needing. I just need Anguirus and Hedorah to complete the set! Target and Walmart had no new Earthrise sadly, but in time I assume. I did score some face mask adjusters at Staples though. I've got a big old head and in the new normal of wearing these things, sometimes they are just a touch too small. It's nice to not have sore ears. I need to pick up the Playmates Space Godzilla. I've got all of the Playmates Godzilla figures except him and I might as well complete the set. I mean, duh.

I spent the rest of Saturday with the cons panels playing while I did various things. Eating pizza? Right in front of a panel. Putting together newly bought furniture? Right in front of a panel. I'd pop in and out of panels and watch parties also. That was something really cool. In my living room, I'd just watch the panels on TV. Up in my room, I had it running on my tablet fully taking advantage of picture in picture video screens. Muting subtitled videos to listen to the audio from live streams. That was neat.

Later on in the night, I'd watch the replays from panels I missed while running errands and when I took a nap. Finally around 3am I went to sleep as dude... tired. Sunday we worked on our yard, same thing. Break time, pop in on phone. When we got done, same thing. Either watch a missed panel or a stream. Though I only did one at a time. I was a little worn out from putting mulch out in the hot sun.

I need to go back and watch the rest of that Western monsters in Japanese fiction panel, it was pretty interesting. Unfortunately I wasn't able to pay the stream as much attention as I wanted to. Fortunately, it's available to view. I can dig this kind of convenience, it's easier to dig than some of those old branches out from under those bushes were.

Some of my favorite content was the show was in the opening ceremonies panel. There was a good 15 minutes of pre-recorded video messages from various actors and directors from various Godzilla, Ultraman, and other productions. They were generally messages of encouragement regarding the pandemic and pretty cool to watch. That western monsters panel I mentioned earlier and the Yokai War panel from Saturday I'd like to go back and watch in their entirety. Which I will.

The Kaijucast Reunion stream was pretty great as it pretty much went from kaiju discussion into trivia to musicians performing classic monster themes. Really neat. Daikaiju TV had a steady stream of watch parties going all weekend that was super fun to pop into and out of. If I was a better discord user, there were plenty of related chats going, but sadly I'm pretty bad at Discord. Though between the live streams and watch parties, I had plenty of live chat available.

In all, my first virtual con experience was a good one. There's others going on this summer and I'm pretty interested in doing more. While nothing beats the in person aspect of a con with other fans, this wasn't bad! I could see myself playing one of my micro consoles with my tablet nearby with a stream going. It was great to indulge myself in Godzilla and company with other fans in the company of my own home. Totally would do again.