Friday Nights mean Frights here on the base! Continuing on our excursion into the Crestwood House Monsters books, I thought another fitting for the summer season story would be The Blob. Honestly it's because I associate the 80's remake with summer more than anything, but hey... work with me a little here. Between seeing the various commercials on TV one summer, and then the following summer regularly seeing the cardboard standee at the local video store, it's just a summer time movie in my head.

The Blob is the story of a weird slime from space consuming every person in it's way. The blob gets bigger the more people it eats and before you know it, things get really out of hand. Even with the classic movie represented above in it's Crestwood House form, all I can think of is the standee at the video store. I was a horror fan from a very early age, but usually was instructed to pick from the kids section on our visits. While picking out a collection of cartoon episodes of Centurions or Peanuts, I'd eye the boxes of the horror stuff that was literally in the same aisle.

I don't know if the shop staff were being jerks, or it just somehow worked out that way, but I can still see other kids bawling their eyes out at the various cardboard standees of Freddy Kruger and company staring at them. Me, I liked looking over the boxes as much as I could. I still miss the horror section of the video store. Preferably in the VHS era when those boxes had so much character. Ironically I don't know if the remake Blob still exists. The movie is probably in a discount bin at Walmart somewhere. But the blob substance used in the original movie, it never dried out and is still kept in a bucket. Weird.

The preview above shows the full book, but if you want to download it to a tablet or phone, you can do so for free by following it's links. 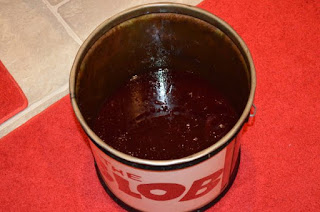