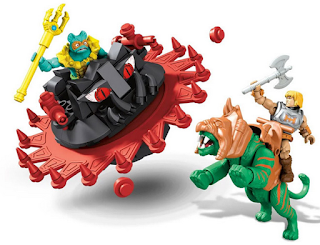 New MOTU Mega Construx toys are up for pre-order on BBTS. While I'll be content to wait for them to appear at my local Walmart, this is indeed exciting. Y'all read the site, y'all know. Two sets to be released in July and a new wave of figures in August. This is great. The first of the sets is Battle Cat vs. Roton. What's He-Man without Battle Cat? Not just another He-Man either, this time we get the Battle Armor version which looks great. Roton looks pretty good too, but I think the Mer-Man might be the spotlight of the set for me. For the record, auto-correct is still suggesting pee-order. I give up. 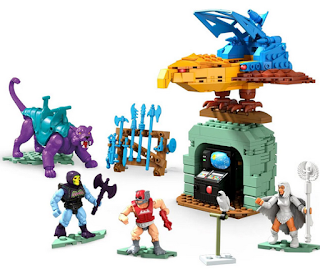 The other set is Panthor at Point Dread. This looks AWESOME. You get Battle Armor Skeletor and Panthor riding in to face off against Zodac and Temple of Darkness Sorceress. Which is Sorceress in her sometimes white attire as seen in mini-comics, the movie, or Universal Studios. The Talon Fighter with this set looks awesome. It can perch on Point Dread giving a location for the fight including that awesome rack of extra weapons. This is a cool set. I've always really dug that bat on Battle Armor Skeletor. See, he is a walking Halloween decoration. 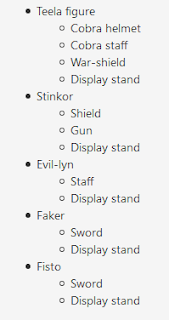 Wave 2 of the figures is slated to come out in August. There's no pictures yet, but the assortment list looks pretty good. I'm not sure if Evil-Lyn will be the same as she was in wave 1, if so I guess I'll pass on her. Since this series is different than the standard Mega Constux Heroes figures, I'm assuming Teela and Faker will have new (and better) paint decos like Skeletor had in wave 1. Fisto and Stinkor are what I'm most looking forward to here. Despite the awkward name, I've always liked Fisto and Stinkor... he's probably one of my favorites. I doubt the skunk smell will be included this time, but the skunk colors and orange armor have always just looked great. I... kinda hope he stinks.
at June 04, 2020
Email ThisBlogThis!Share to TwitterShare to FacebookShare to Pinterest
Labels: battle cat, fisto, He-Man, Masters of The Universe, mattel, Mega Bloks, Mega Construx, motu, panthor, skeletor, stinkor, the sorceress, zodac, Zone Base