By The Power of Poseidon's Fury 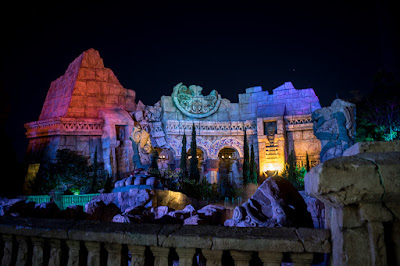 If you've ever been to Universal's Islands of Adventure, you've probably found yourself marveling at the gorgeous Poseidon's Fury facade. It's truly a sight to be seen, while opinions of the attraction itself may vary, there's no lack of love for the look of the place. It's awesome. Set in the ruins of a temple where a battle of good and evil takes place over a magic weapon... does that sound familiar? 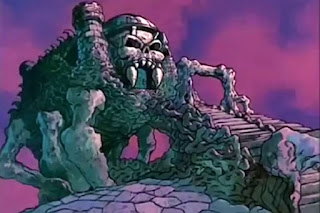 It's pretty easy to compare He-Man to any fantasy setting, but to be fair, She-Ra does have character appearances in the Lost Continent. I can't be the only one who's looked at Mythos and thought 'if only that face was a skull'. Not to mention, before Harry Potter moved in next door, that area was Merlinwood, which adds further Eternia vibes. So am I just talking crazy here? Just drawing obvious comparisons? Speculating for funsies? Well, yes, but not without reason. Theme parks tend to change up stuff as time passes. Poseidon's Fury was first called Poseidon's Fury: Escape from the Lost City was was a somewhat different experience.


After a few years of not the most favorable feedback, Universal had the show revised by Gary Goddard. Gary is a former Disney Imagineer who has worked on a ton of theme park attractions and happened to direct a certain (awesome) movie.


Gary came in and reworked the story, now telling the tale of a villain named Lord Darkennon battling Poseidon. The attraction was reworked utilizing the originals sets with new footage. Very similar new footage. By similar I mean really similar. By similar... I mean He-Man, he made He-Man.


I don't blame you for skipping around the video of the reworked show (boy that air conditioning feels great on a hot Florida day), but if you looked around 9:15 you'd notice a character named The Goddess, who was Guardian of the Temple. The Goddess? Dammit Gary. 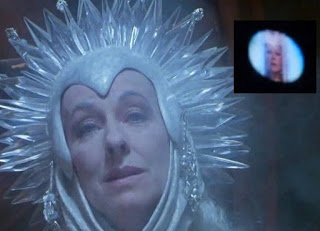 The Goddess is performed by Christina Pickles, who also played as The Sorceress in Gary's Masters of the Universe movie. So the same actress played basically the same character in two different Gary Goddard productions. In fact all the new film for the production could pass for footage from that movie. Coincidence? Yeah, I doubt Gary Goddard went into this project thinking now was the time for that Masters of the Universe follow up. Then again, if not then, then when?

Masters of the Universe is inspired by mid-evil fantasy and Halloween decorations. So a magical temple full of scary skeletons lends itself pretty easily as is. I mean, they even made it into a haunted house for Horror Nights one year. I'm not even joking about the Halloween association either, Skeletor was inspired by a haunted house. I even found a way to crowbar Halloween into this post.