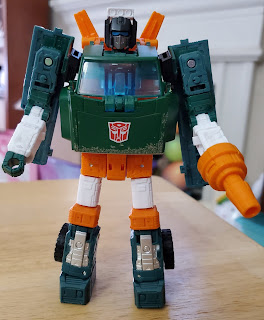 I was pretty surprised to see some Earthrise deluxe class toys at my local Walmart this past weekend. Figuring the Netflix toys would take the spot for the time being, but was happy to see a Hoist mixed in with leftover Siege, Netflix Siege, and the million Chromia's from both nobody is buying. I guess somebody else grabbed the others in the assortment and that's ok. I'll get them eventually. Honestly I was aiming to get Hoist first anyway, so it worked out pretty well.

I've always liked Hoist. In G1 he came from the same Diaclone mold that Trailbreaker came from, but I've always like Hoist better. The green and white with a more characterful head sculpt just looks great. Not that Trailbreaker looks bad mind you, it's just a preference. Earthrise is about faithful recreations of those classic G1 characters with modern toy engineering. This is an update of a Transformer, which was a living alien robot, while a Diaclone was just a mech piloted by a driver. The updating makes Hoist look more like a character than a vehicle, and that's great. So far that's been true for all the Earthrise toys I've gotten and I love it. 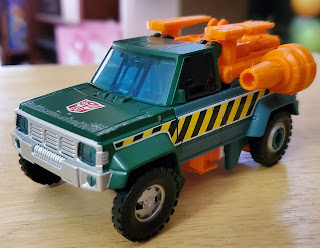 Hoist turns into his classic pick-up truck with a towing kit. It's a nice local mechanic look which gives a little variety to most medics being Ambulances. Being from the south, he reminds me of that guy everybody knew who usually had some odd lawn mower or car to fixed in his front yard for sale. Had a garage full of oddball contraptions and a model train. Might of been the local high school shop teacher or worked at the hardware store. I've known a lot of guys like that and I don't know if's part of the reason I like Hoist so much or not, but it makes for a great character. I look at his truck mode and I hear some old country song coming from his garage as he fixes somebodies weed eater. 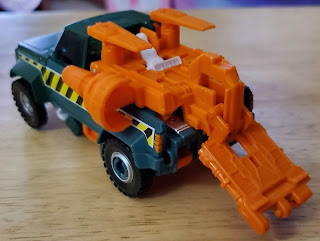 I mentioned his towing kit. While I'm not 100% certain if it actually works and Hoist could tow an Autobot, but it looks like it could. The tow boom unfolds and looks like it could fit underneath a car mode Earthrise toy. I didn't think to try it out while I was playing with my new toy after eating breakfast this morning. You might notice the connector  at the end of the tow boom, that indeed is a working Micromaster base connector allowing Hoist to link up. His laser/welder can be stored on the towing kit, which matches the look of it all. It can be held like a pistol in either hand and thanks to a cuff at the base contributes to Hoist's classic appearance. 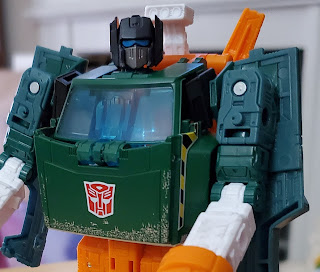 If you couldn't tell, I like Hoist. Like all of Earthrise so far, he's wonderful. Just a great update of a classic character that's faithful to the original toy. He's pleasantly articulated and looks sharp. I'm not trying to give constructive criticism here or give a review here. I'm talking about something I like on a site about things I like. I like Hoist.
at May 12, 2020
Email ThisBlogThis!Share to TwitterShare to FacebookShare to Pinterest
Labels: diaclone, earthrise, Generations, Hasbro, hoist, Takara, toys, Transformers, War for Cybertron, war for cybertron trilogy, Zone Base