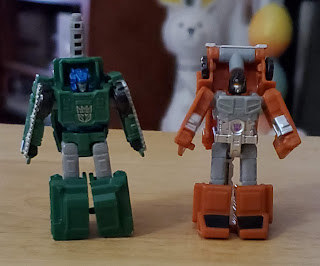 For a site named after a Micromaster base, I sure haven't talked much about the new Micromasters that have been coming out. Yeah, what's up with that? Anyway, the new Earthrise Military Patrol brings updated versions of Growl and Bombshock from the original Military Patrol. I love them so.

These newer Micromasters have a lot in common with Mini-Cons from Armada. Similar build and construction. This isn't too surprising as Mini-Cons were basically a return to Micromasters at the time. It makes for a nicer toy with more moving parts versus the limited articulation of older Micromasters. They were tiny G1 toys, it's kind of amazing they had joints at all. Thankfully with more modern toy advances, Growl and Bombshock can move a lot more.

These newer Micromasters have a combining gimmick were the two figures in the pack form a gun or other weapon kinda sorta. It's a nifty way to work such smaller toys into a line with much larger toys aside from the base modes. Not to mention, they pair well with the similarly sized Battlemasters by doing so. I keep forgetting about this though and forgot to take a picture. Thank goodness for Google images huh.

Being Micromasters, I unfairly love them. I'd probably (would) kill a fool over them. They're wonderful. Though I'm sure a few are probably bothered that a patrol is a 2 pack now and not a 4 pack like in G1. Times change, they didn't cost 10$ a patrol back then either. It is what it is. I hope the other two members will find release by way of repaint in a gift set ala that awesome Target Micromaster set from last year. I got so much more from that than I ever did from a BotCon set. Target's pretty awesome.