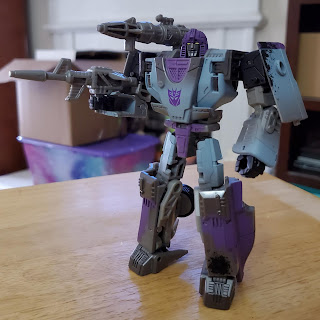 Of course my usual weekend trip to Walmart for groceries and other household needs resulted in a trip to the toy section. The new Netflix Siege Transformers are starting to show up across the country and mine had most of the deluxes. My store is a little odd that it's usually a little behind other stores in stocking, but has plenty of what it does stock.

I grabbed Mirage as I've been looking most forward to him and Scrap Face from the deluxe class. They didn't have Scrap Face sadly, but one out of two ain't bad. Not to mention, I'm moving next month so not wanting to pack so much keeps my toy purchases down for the time being. I'm usually happy to buy just one a week anyway most of the time aside from occasional splurging. Keeps from having weeks on end without anything new to look forward to.

Mirage is a repaint of the standard Siege Mirage from last year with his deco playing into the upcoming Netflix series. I really like this mold and the new colors look fabulous on it. The colors invoke a late G1 vibe and on this mold make me think late Euro-G1 for some reason. It just looks wonderful. I like the multiple weapons allowing for a traditional Mirage look, while also allowing for them to be held in a manner of ways. I've always been partial to the shoulder mounted rocket launchers, for me there was no other option.

Being a Siege toy, Mirage transforms into a Cybertronian version of his classic F-1 Liger race car. Cybertronian is a nice catch all wording to describe a more sci-fi spacey look, which is one of the reasons I liked Siege so much. I like sci-fi spacey looking Transformers. Mirage doesn't too far different from his Earth based car mode here if that's not your thing.

If you didn't like the 'battle damage' paint from normal Siege, you'll probably not like it here. I either hardly noticed or thought it was neat when I did. I think it looks great here. Mine didn't snap together well in a few places during transformation, not sure if that's just on all of them. Can't remember it being an issue on my regular version offhand. It's not too bad, just a little bit of an annoyance in an otherwise great figure.

By now I'm sure you've noticed his Decepticon symbol. Siege is a prequel of sorts, taking place during the early days of the war. I haven't seen the show yet (because it hasn't aired) but presumably Mirage starts off as a Decepticon and switches sides at some point. This plays pretty well into Mirage's classic bio in that other Autobot's don't trust him. Being a former member of the other team is a pretty good reason for that. I'm pretty interested in seeing what causes him to change sides.

If you haven't noticed, I like this toy. I've always liked Mirage's Egyptian inspired looks. It's something Takara used a lot on older Microman and Diaclone designs. Seeing the merge of that classic Diaclone design and an updated sci-fi spacey look is great. The more imaginative colors on this repaint is welcome too. I've always been fond of those late G1 colors and they work well here. It's nice when you like a figure so much. I prefer to spend my leisure time on things I actually like, and this guy's a great use of that time. 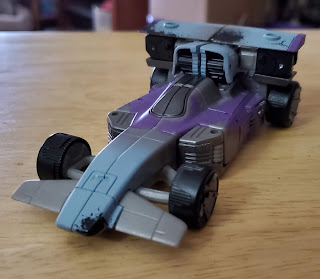