If it wasn't completely obvious by my off schedule posting from yesterday, I had a bit of a schedule interruption. Which lead to me not working Tuesday night. Which lead to me watching a bunch of Sega videos on YouTube. So basically I did the best thing possible on all accounts. Which leads to the video above. I've said 'which leads to' a million times. For awhile, video game companies released these promotional videos for new products. It was pretty cool, I still got a few from Nintendo and Turbo Technologies somewhere. I now it may sound completely ridiculous in today's world of video available all the time, but at the time it was pretty magic to get one of these tapes in the mail.

Obviously I'm a pretty big fan of Sega and their systems. I've always just really dug them, you know? The Genesis/Mega Drive holds a special place in my heart and the fact that I can easily swing by Target and grab a Genesis Mini or an At Games Genesis even today is pretty great. People often marvel that the 2600 was on shelves for as long as it was without noticing that the Genesis/Mega Drive has been for sale since 1989. That's pretty amazing.

Of course that's not ignoring the bumps in the road and for awhile there Sega seemed to hit every single one of them. I can play 'what could have been' as much as I want and things still went the way they did. I could armchair quarterback how things could have worked better 'only if', but it's not like I know better. I can just say, man I wish things would have worked out better for the 32X and the Sega CD. I liked those. 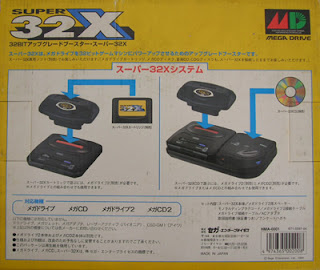