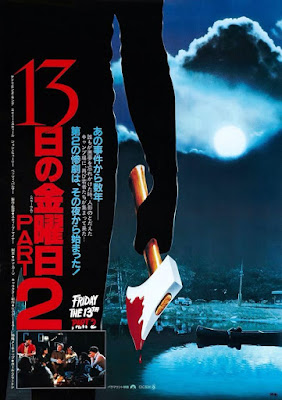 It's Friday the 13th! If you're superstitious, this is a very unlucky day! If you're at summer camp, you're probably gonna get murdered. Though for the rest of the world, it's a little mini-Halloween that randomly pops up during the year! There's probably a horror marathon or two on TV tonight. A bunch of Jason Vorhees memes getting shared on Facebook. Just a little spooky fun inserted into your routine. Did I say a mini-Halloween? You're damn right I'm running with it.


Friday the 13th part 2 is probably one of the better entries in the series. As a direct sequel to the original movie, it continues the story and keeps the same general vibe. It takes what made the original good and adds to it. One of the more cool aspects of this part is... several counselors live. I know, I know, but here me out. Jason (whom is somehow alive now because I guess) is killing attendees of a counselor training camp being held across the lake from the now closed Camp Blood Crystal Lake.

The camp has quite a few attendees as during the time summer camps were big business. So, the head honcho takes the group out for a night of fun before the hard work begins. Well, he takes out those who want to go out that is. The rest stay at camp and that's where the bulk of the murder happens. Aside from said head honcho and main girl who return to face Jason, the rest just stay and don't get killed horribly. One survivor is camp prankster Ted... who you pretty much wanted to see die. 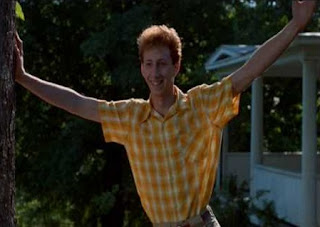 Now, what happened to the survivors after? Well, they got off pretty lucky. Not only did they survive, but they didn't have the ordeal whatsoever. They just found out what happened the next day. Horrible sure, but you don't go Laurie Strode crazy after finding out some people you just met died while you were at Applebee's. Wait... Laurie Strode... mini-Halloween?


What we have here is a Halmark Halloween commercial from the late 80's. I'd give an exact year, but they reused it for awhile. This version with an added spooky sounds tape bit added on is from 1989, which is like eight years after the movie took place. I chose the picture above of Ted to help you all out, but if you didn't notice at around :25 there he is rocking a 'this is my costume' shirt. Not only did Ted survive getting killed in a slasher movie, but he chose to wear one of those shirts on Halloween. Because, he's funny, get it?
2 commercials Friday the 13th Halloween halmark Horror Jason Vorhees retro scary slasher movies Spooky Zone Base