There's something about a small boy straight up pulling a gun out like that. Though, I I saw an Acrosatan out in the wild, I might do the same. Fortunately that's not ordinary gun, that's a Gun Robo M-1910. In Transformers the mold got used for Browning in Masterforce. I remember for a while there was a rumor going around that M-1910 was considered for Megatron instead of the Walther P-38. I would have liked that better, I've always thought it was a better toy. 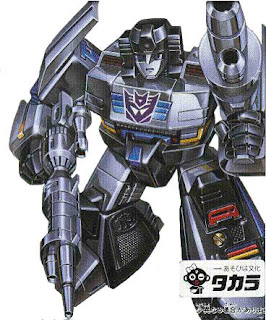