Bludgeon And His Creepy Looking Ass 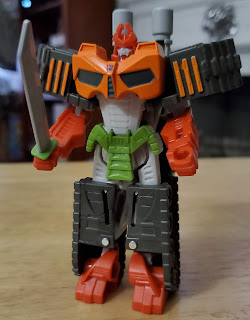 Like Repugnus yesterday, I got Bludgeon a month ago... but I'm like doing a thing here. Bludgeon is a Transformers Cyberverse Turbo Changer that 100% proves everything I've been saying about these toys. Pure old school super robot toy with a simple gimmick transformation. I had noted Repurnus needs a gun, since he could hold one. Bludgeon's known for his sword, and comes with one that he can hold! A Turbo Changer that comes with a traditional weapon!

Turbo Changers lately have been coming with an additional play gimmick and Bludgeon technically does as well. If holding the sword in his left hand, you can activate his WHIRLWIND SLASH! Basically, You spin his hand right round, baby. Right round like a box fan, baby. Right round round round. Transformation is turbo changing by pushing/pulling his legs and adjusting them arms. The sword stows between the tank turrets. Or you can stick it in one of the barrel for some wacky ammunition. Imagine getting a sword shot out of a cannon at you. Bludgeon really wants you dead, specifically by sword. Dammit Bludgeon, calm the fuck down.

Bludgeon is just the toy to fiddle with while you watch tv or ... what was that? Ya'll here something? Looking at Bludgeons skeleton face for so long can give you the creeps huh... wait... Ok, maybe I've spent to much time isolated in the house but... I swear I hear something. 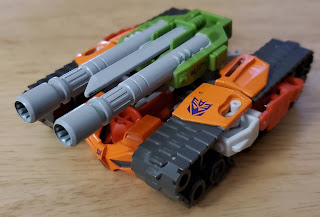