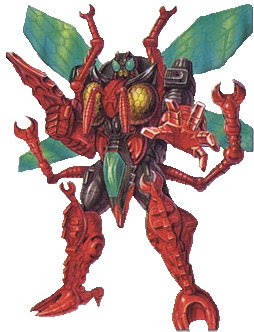 After the quantum surge, Waspinator became a meched-out, armored wasp with the ability to change into a fighter-jet as well as a bio-genetically-enhanced robot. His personality, however, did not change much; he's still high-tempered, aggressive, and dangerous when angered. Only now Waspinator is faster, armed with a toxic stinger and more driven in his mission to wipe out the Maximals forever!
beast wars bios metals Predacon Predacons Transformers transmetal Transmetals waspinator Zone Base