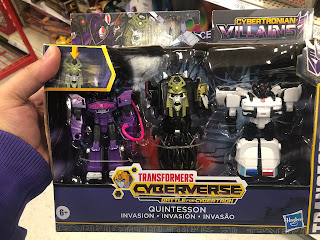 I talked about this briefly Thursday, but I'm so excited for it, I felt like talking about it more. This set was found at Target by popular toy reviewer Peaugh (the pics in this post are from him) and looked to be put out earlier than intended. It's not entirely known (but speculated) if this is exclusive to Target, but it scans at 29.99 on their checker, which is a pretty good price. A little earlier this year, maybe a month or two ago, first looks at the new Cyberverse packaging with additional naming on the packaging got out and this looks to follow suit. It looks nice.

I don't know if this set references an episode of the cartoon, or is just a fun thing on it's own. I don't care. I dig it. Something like a neat box set with a theme is a thing I really appreciate and it doesn't have to be confined to a big expensive thing either. Something like this is the kind of thing I like.

It's nice to have a Quintesson in the set. Some folks have pointed out his black body instead of gray, which makes me wonder if there will be multiple releases of the toy in various colors. Perhaps this is a individual Quintesson and lhey've just used one trademarked name to represent many. I'm going to call him Earl. Earl seemingly has made some neat mind control helmets that fit over reuses of the Spark Armor versions of Shockwave and Prowl. I like the idea of the Autobots and Decepticons having a mutual enemy in The Quintessons. That kind of thing is fun in a fictional setting. Maybe the cartoon will feature Decepticon focused episodes of them fighting Earl and his gang. That kind of thing is neat. 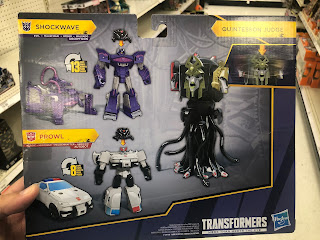