Will I ever get tired of my lame Great Value BotCon joke? Well, I can't predict the future, but right now I foresee a big nope. 2019 is coming to a close and folks have already found the 2020 Walmart reissue Astrotrain! I immediately checked the Walmart ap and sadly it's not in stock at the stores local to me. The ap is pretty useful for these types of things, but sometimes it'll drive you crazy. The ap will show it in stock, but it won't be on the shelf. Meaning it's still in the back. Or in 2018, it showed me the store nearest my work had Devastator in stock and no Starscream. Upon arriving... it was the opposite. Guess somebody goofed.

Thanks to the fan votes from this time last year, we know that Astrotrain and Perceptor will be the 2020 toys with no mention of Minibots. Seeing as the 2019 Minibots were something of a surprise, I'm hoping for a repeat of that. You had Optimus show up in January, Gears and Warpath shortly after. Soundwave in summer with cassettes showing a little later. The 2018 ones came out late summer with the Minibots in December. I'm wondering if 2020 will follow 2019 closer to release pattern. Hopefully that means smaller bots being a surprise. I'd be game for more Minibots or cassettes. Maybe something really neat like Throttlebots or something. Sure, the pattern is following previously reissued molds, but hey... we really only know what they tell us or get's leaked out. So, maybe something right out of the left field could happen. I'd really like that.

I'm glad Astrotrain's in his classic grey and purple deco. I'm sure they'll be slight differences from the original toy and this version (I like that honestly). In the mid 2000's when they released Astrotrain it was in his Japanese white deco. At the time that was really cool. White Astrotrain was like Stepper/Ricochet or Artfire, a cool oddity that was pretty hard to get at the time. Stepper got reissued making him easier to get. Same with Soundblaster. Suddenly these harder to get guys were a little easier to get and a little more common. While I have an old purple and grey toy, getting a nice new one is something I'm looking forward too. I've always really liked Astrotrain, so it's a pretty big treat for me. 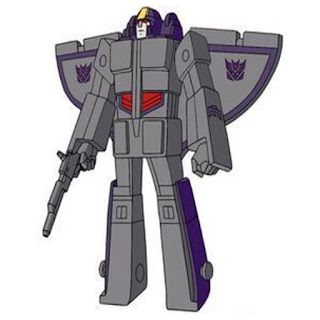