Everybody always say's McBoo Pails when the words Halloween and McDonald's are combined. That and gift certificates for soft serve cones that they never redeemed. Though really, McDonald's has offered a plethora of Halloween fun way past simple trick or treat buckets. I'd also like to take a second to express my extreme jealousy of customers of McDonald's in Japan and their gold mine of Halloween themed special edition foods. Just Google it and see what you're missing out on. 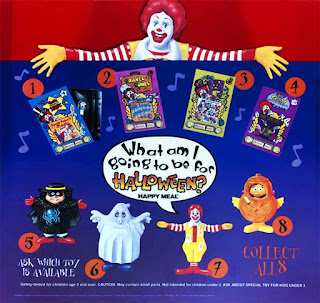 Fortunately I was able to find both commercials edited together as it was a two part special event. Ronald didn't know what to be for Halloween, which played into the second part. Not only was 1995 two years until the milkshake machine worked last, but also the year of the 'costume' figures. Ronald, Grimace, Birdie, and Hamburgler (on parole) with removable Halloween costumes. Each pvc figurine had a removable costume that snapped over the figure. Also available apparently was some tapes. I guess the had some ZZ Top songs or something on them.


Aside from the genius of McDonald's Pretenders, I've got to give the marketing department kudos for the mystery of Ronald's costume. The two part costume tied into the in store poster with Ronald not wearing his Pretender Shell... costume, but also asking what he was going to be. The surprise unveiled as you opened the Happy Meal box. What do you know? Ronald went trick or treating as Frankenstein! Though, we all know what Ronald was really up to on Halloween.