I wasn't allowed to have a Boglin


I'm probably too old to still be bitter about a toy I wasn't allowed to have. I mean... I have a ton of toys. Though one that has always escaped my grasp was a Boglin. While I'm sure you've probably guessed why I would have wanted one, my parents refused. Why? They felt it would give me nightmares. A fair concern for a parent to have. Though it's also code for "hell no, I'm not buying that thing". A parent would probably skew away from a tiny monster with moving eyes sure to scare the shit out of their child late at night... also waking them up. Which... you know... starting to think parents are full of crap when they say they don't want their kids to have nightmares. 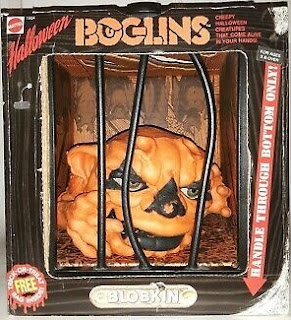 There was even Halloween Boglins (goddammit spellcheck one more fucking red line), which of course was a perfect. Between Boglins and Masters of the Universe's toy line made from Halloween decorations. It was clearly Halloween all year round at Mattel in the 80's. Like this site. Wait what? Forget I said that last part.
at October 23, 2019
Email ThisBlogThis!Share to TwitterShare to FacebookShare to Pinterest
Labels: boglins, commercials, Halloween, Japan, japanese, mattel, monsters, scary, Zone Base