Happy Halloween... is that Cop-Tur?


I've never been to Terry's 5&10. In fact I've just heard of it. From all appearances, it looks like a charming small down general store. I know stores like that still exist, but none near me currently. Either way, holy crap Terry's has an amazing Halloween selection. Or had... not sure if they're still open or how old this commercial is. If you just glance at the commercial, you'll see the standards. Candy... decorations... masks and make-up kits... Collegeville costumes... wait... that wall of masks... what did I just ... 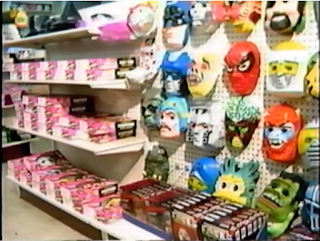 Man, check out that selection! Megatron, Man at Arms, Beastman, Spider-Man,  Leader-1 AND Cy-Kill! Merman! Some generic monsters... I think that's Batman... who's that next to Batman? Or under him? I feel like they're somebody, but the angle of the image and blurry colors of local TV quality video is just enough to make it hard to... DUDE IS THAT COP-TUR NEVT TO MERMAN? I WAS SO EXCITED I MISSPELLED NEXT!

What's amazing is... you realize some of that stuff was probably there every Halloween until it got sold. While I don't really have any small town local stores like Terry's 5&10 currently, I have in the past. Depending where I go, I still do. I've been in these types of stores a million times. I remember once on visit in the early 90's to see my Grandma and going in one of these stores. There was a Thunder Lips figure from Rocky 3 sitting on the spinner rack next to the water balloons. Probably should have grabbed that. Man... just thinking about strolling into that store and seeing those masks on the wall... Terry... want to make a deal?
at October 04, 2019
Email ThisBlogThis!Share to TwitterShare to FacebookShare to Pinterest
Labels: Batman, commercials, costumes, Gobots, Halloween, Master of the Universe, retro, spider-man, terry's 5&10, Transformers, trick or treat, Zone Base