Grandpa Munster will fart for money

Who could blame him? Appear as his famous character and get paid. Easy money. This lead to various hotline commercials where he at some point started introducing himself as Grandpo regularly. After a while it got weird. The video above is a VHS release from 1989 where Grandpa hosts various trailers for Universal Monster movies dog shit drunk.

I rented the tape when I was a kid, hoping for more of that great TBS Saturday action... nope. What I got was Grandpa rambling to an off screen Igor, who was probably the guy with the camcorder, and tying it into the various trailers. There's a point where he clearly hits the wall and is just trying to stay awake. It's weird, it's bizarre, and yes I own it on DVD. 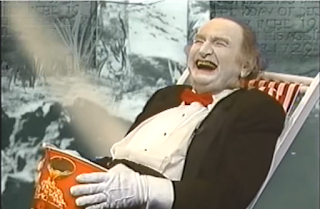