A Three in One villain that's Chillin


I'm going to talk a little about one of the best Transformers toys ever made. Dreadwind from Generation 2. A combination of great articulation, colors, and play value, Dreadwing is just the best. Dreadwing is a set though, combining the Dreadwing toy with his partner Smokescreen (they reused names, get over it) to create the combined vehicle form.

On their own, the two figures are solid. Dreadwing is a big and bulky brute who's a triple changer. He can turn either into a stealth fighter or a tank. The gattling cannon carries over to each mode, allowing for a ton of firepower no matter the situation. Smokesreen is a much smaller toy, turning into a jet and packing two missile launchers that can be utilized in both modes. Both figures weapons use the same missiles. Combining the two is not much more than inserting jet mode Smokescreen into jet mode Dreadwing. Doing so adds to the overall look of the vehicle mode however.

The mold got reused several times as different characters, in fact the first intended reuse in G2 as Megatron and Starscream is one of the most rare Transformers ever. A version of this set came out in Beast Wars 2, but it's not completely the same. I think my favorite version of the mold is the Gigant Bomber and Smokesniper set from Robot Masters. It's just a super pretty version of the set as new characters from Victory! 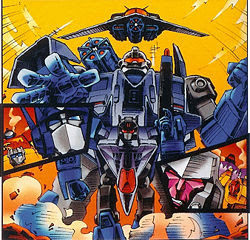