Harmony Gold, yes THAT Harmony Gold, whom you probably know better from making Robotech from various anime (Macross, Mospeada, Southern Cross, the occasional KFC commercial) and all the assorted stories that's gone with it since. Yes, that Harmony Gold at some point dubbed 'Kyōfu Densetsu Kaiki! Frankenstein' a production by Toei into what's commonly referred to as 'The Monster of Frankenstein' or 'Frankenstein Legend of Terror'. It's called two different names because they didn't actually name it anything, but it was advertised as one or the other. Yep.

Frankenstein and all the other cool kids come out to play on Halloween. Though I'm going to go ahead and give full disclosure. This is a pretty depressing movie intended for more mature viewers. It contains themes of suicide and religion, so be advised if those are things you might be sensitive about. 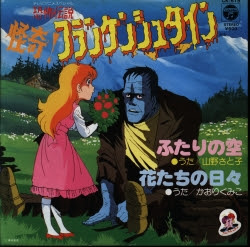