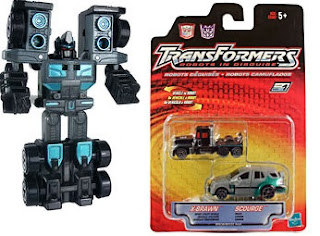 It's said that dynamite comes in small packages, and I don't know if that's true but... that was a horrible start. Whatever. Robots in Disguise (2001) was the Transformers line that brought Autobots and Decepticons back into the fray and ended the beast era. Some like to argue that RID was part of the beast era due to the Predacon characters. I've also seen people argue with the cashier at Arby's that they sold cheeseburgers, sssssooooo....

Any who, RID was a unique line in the history of Transformers. Transtech was intended to follow Beast Machines as a hybrid beast/vehicle series. For whatever reason is given today plans were changed and the decision to go a new route was made. That new route ended up being Armada and needed a little more time to develop. In Japan Takara had already experimented with a more traditional TF show called Car Robots. Hasbro fast tracked Car Robots into Robots in Disguise to have a Transformers series on shelves and on TV to fill the time needed. Car Robots was a relatively short anime with a small toy line mostly consisting of repainted toy molds and a few new toys. Hasbro took that and added more repaints to fill out the line. One of the new Decepticons was a evil clone of Fire Convoy/Optimus Prime named Black Convoy/Scourge whom was a black and teal repaint of the G2 Laser Optimus Prime toy.

Hasbro expanded the Spy Changer by releasing same sized versions of the shows main characters. This was probably the most direct beginning of the Legends/Legion style of toys offering lower priced figures of the main characters. It was in this assortment that we got the really neat Spy Changer version of Scourge. Spy Changers were originally made from the G2 Gobots toy molds and were really great little toys. Basically you had a Hot Wheels size car that was even compatible with a Hot Wheels car track! They'd transform into simple robots full of charm. It's not hard for readers to guess I loved them.

For a short time it looked like this was the only toy of the character getting made and the Spy Changer versions were flying off the shelves! Unlike other Spy Changers, Scourge didn't come with a weapon, nor did he have his trailer. During this time there was a ton of people creating their own custom weapons and trailers for the toy. It was pretty fun to take in and watch. 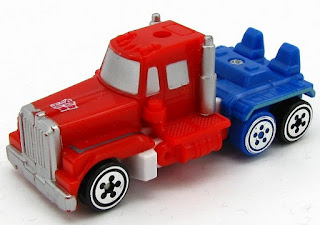 In what has to be the only time it happened, a toy based on a repaint of another character got repainted into the original toys colors. Later a Spy Changers version of Optimus Prime was made from the Scourge toy as part of a line of Spy Changers based on the classic G1 characters. That was a mess of words that barley formed a coherent sentence and I'm not sorry for it. This little line was available as a discount line at Family Dollar type stores, though a year prior were exclusive to Kay Bee Toy stores in different packaging. Laser Optimus Prime was a good looking toy, Scourge was a good looking toy, so it goes without saying this was a good looking toy. 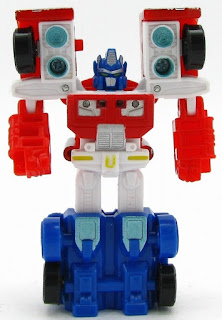 This little series was fun to collect, easy and cheap, you couldn't help but to acquire multiples without thinking or worrying about it. At a small local sci fi con, I had ran a Transformers panel and had them on hand as raffle prizes. I don't think I know anyone who hated them and if anyone did hate them... how? This great little mold got another use just a short while later in a really fun way. 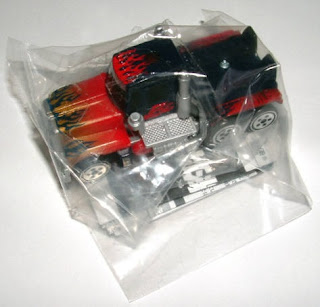 I don't have to tell you the 2007 Transformers movie was a big hit. It's just a fact and there's no arguing that. Unless you're stupid and well, you're on your own there dummy. A movie meant to sell toys is going to have a ton of merchandise, it's why they made it. One such thing was a the pictured above pre-order exclusive for the DVD in Japan. 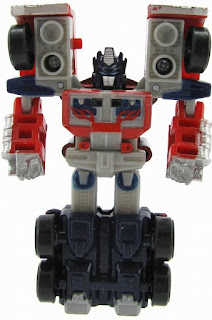 That pre-order exclusive was the last version of the great little mold, but what a way to go out! Now as the movie version of Optimus Prime the toy looks awesome. I distinctly remember the summer before the movies release (which is an awkward was of saying 2006) pictures of the movie characters first started hitting the internet and everyone was talking. Optimus's truck was shown before his robot mode and while some were hung up on G1, several thought they looked cool (money walks and bullshit talks). I saw the long nose truck and hoped for a repeat of the Laser Optimus toy as it was excellent and man those flames looked cool. While the actual toy was pretty different, I clearly wasn't the only one who had that idea.