Get your Kooky Spooks on 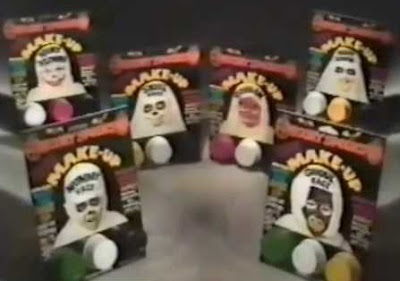 It's mid-August, summer's almost over and the back to school stuff is making way for Halloween goodness. Well, before this year when stuff started mid-summer and I'm not complaining one bit, but work with me. The early stuff is usually odd craft things, some candy here and there, and they start stocking the make-up kits. Sure it's just a few tubes of white and green at first. Maybe black, that random eye patch that nobodies going to buy. By September it'll all be there. Various kits from .99 cents to a million dollars. You can be a devil for a dollar, a witch for a little more, or even those crazy glue on scars and stab wounds for a good twenty. However among the many, there are a few stand outs. One such was Kooky Spooks!


Let's talk about Kooky Spooks for a moment shall we? I don't know if you caught the 'when it dries it cracks' bit in the commercial, but that was indeed a selling feature. Sure all the make-up did the same and there was a good chance the bottom half of your face would of flaked off by the end of the night assuming the rest didn't sweat off. Kooky Spooks had the damn gall to sell that common costume malady as a freaking feature. I kinda admire that. Let's take a second to look over the directions. 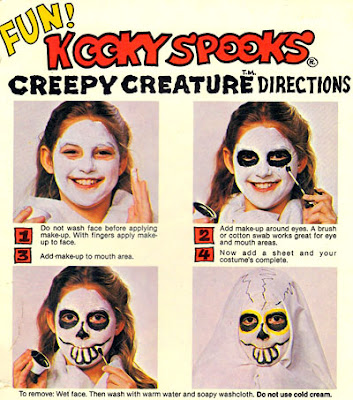 Now before you study this too hard, don't get too excited. No matter how hard you try, you're just going to have whatever color the kit's primary color is and black around your eyes. You might have some black on your nose, maybe some on your lips if you can stand the taste. If you're really good, you'll have some of the other color around that black eye thing you've got going on. Maybe smeared somewhere else. You're parents will tell you the ones on the package were done by professionals, you look great, don't worry. It doesn't matter, half the other kids on the planet will have the same make-up job. 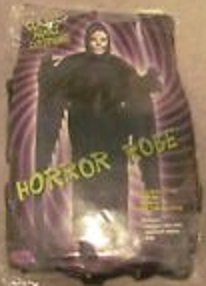 Now you know you'll need more than your Kooky Spooks, you're going to need a robe. The same damn robe every store has that's either a garbage bag with sleeves for 99 cents, or cloth for twenty. Chances are you might be wearing the one your older brother wore before that somehow didn't get thrown away. I think the costume of solid color face with black rings around eyes and robe is probably the official costume of Halloween. It doesn't matter who you are, you will rock that shit at least once. Chances are there's going to be some sort of reflective strip/sticker/glow stick attached to that robe as well. That's important, because there's always that random Ford Taurus just plowing through the neighborhood like it's not the one night of the year all the kids are in the street. You'd think they'd at least see the kid with the glow in the dark make-up... who am I kidding, that crap don't work. 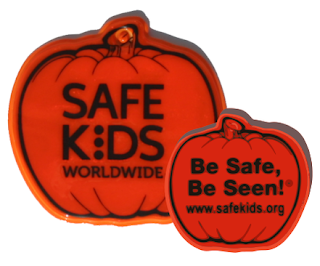