You can't roll through a Roadblock 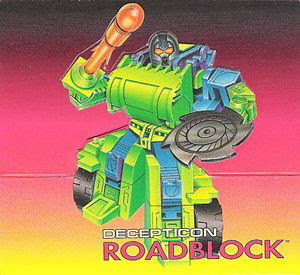 Through all these years, some of my favorite Transformers toys are the Auto Rollers from Generation 2. Big chunky robots who's transformation was based on flipping and on/off switch in the back. You'd roll the vehicle and it would auto transform from one mode to another. There was/is a certain level of joy in rolling a truck backwards and watching it change into a robot or roll the robot forward and watching it convert into a truck. When they first debuted it was mind blowing and exciting, which is a sharp contrast to today's fandom with a contingent that gets outright offended by Turbo Changers. Like I said though, I've always loved them and thought to focus on one of them today. Because fuck yeah Zone Base. 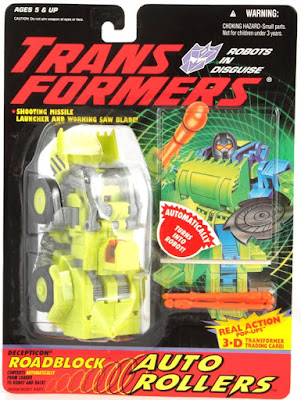 Roadblock is a Decepticon who turns into a loader. Guy's, we've already hit the first break in tradition here, a green Decepticon that turns into construction type equipment that isn't a Constructicon. Roadblock was not just cool because of the fact that he was a rebel, he was a neat toy as well. Not only could you roll him around and lift that bucket, but in robot mode he had a firing missile and a spinning saw blade. Real talk, Road Block will mess you up son. 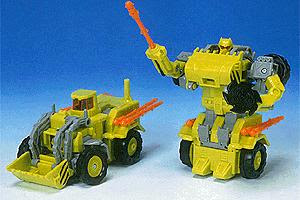 Road Block and Dirtbag (the two released G2 Auto Rollers) are some kind of magic Transformer that I somehow ended up with a million of each. For a while I couldn't walk into a thrift store without seeing one or the other for a few cents. The molds were to get additional use in G2 as Sgt.Hound and General Optimus Prime, but they were canceled unfortunately. Both are as seen here as well as what appears to be yellow versions of the Decepticon Auto Rollers. Either that was the original planned colors or canceled repaints, I don't know for sure. I don't claim to know everything, but I do know how to buy my own cup of coffee. So there. 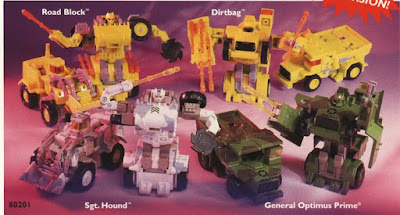 The molds got used again in Beast Wars 2 (and re released in the Korean version of Car Robots as seen below) alongside the unreleased Auto Roller molds. Between not being Constructions and vehicles in Beast Wars, somebodies head just exploded. It was like a thousand voices cried 'IKEA...G1' all at once and were suddenly silenced. 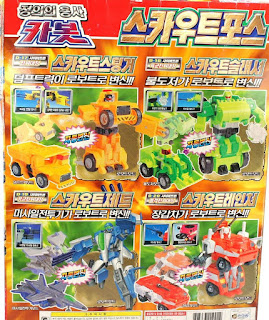 Road Block was unique among the Auto Rollers, because he's the one that wouldn't go away. Not that I'm complaining mind you, but for whatever reason he's the one. Just worked out that way I guess. Regardless of why or how, it did result in some fun repaints. In 2010 a line of really cool Transformer toys called Power Core Combiners were released and hit the ground with a thud. Not everything works out *shrug*. PCC was a neat line featuring basic/scout sized Transformers with Mini-Cons and drones. The Mini-Cons could be weapons or armor and the droned could attach to combination ports creating a larger Transformer. I absolutely loved the line, but like I said, not everything works out. The Japanese incarnation made the toys upgraded versions of older Transformers characters. This lead to Roadblock being reborn as Dozermaster... and holy crap that is one terrible name. 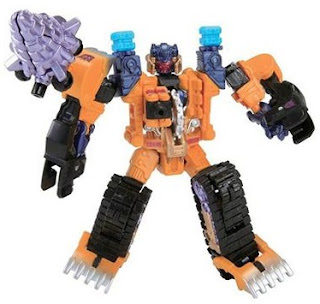 Transformers wasn't done with Road Block just yet though, in the second version of Robots in Disguise that I enjoyed so much. I'd link to a post here normally, but there's a bunch of them here... just search 'rid' in the search thingy (web version). I'd say search 'Robots in Disguise'... but I just discovered a typo in the tagging that says 'robot in disguise' in a bunch of posts... if there's a long pause in posts for awhile, that's because I hurt my head when it hit my desk. 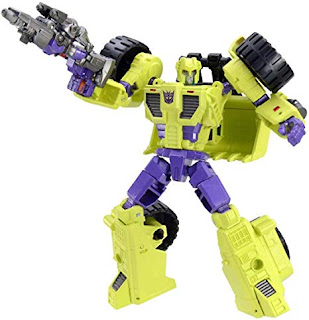 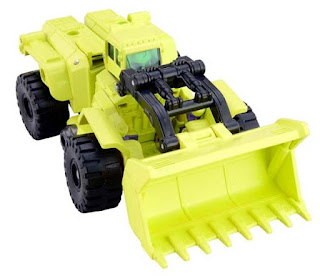 As I've said before, you can't keep a good idea down. At BotCon 2015 a set of exclusives based on that unreleased Hound and Optimus Prime I talked about a few bad jokes up were released. Once again using the Scoop mold for our Auto Rolling Roadblocking mold homage. There's a point where spelling correct gives up and curses you out as a suggestion and that sentence was the millionth time I've caused that. Though unlike Roadblock prior, Sgt. Hound had both his Targetmasters now serving as Diaclone drivers! Super extra homage in a convention exclusive toy that should be super extra nerdy times the super inflated price. Keen! 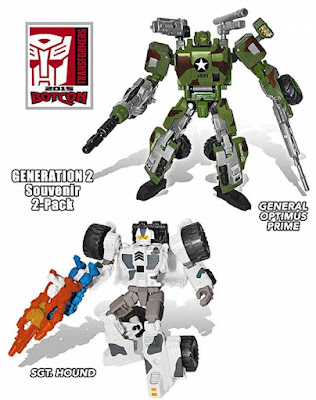 Transformers is 35 years old this year, older if you want to count such things as Diaclone the other toy lines that birthed it. During that 35 (or more) years there's a lot of unique things and a lot of that is seemingly obscure. But even the obscure stuff has a family tree of it's own. Something as simple as a gimmicky toy that for the longest you could get for a song at any thrift store went on to live the type of life usually reserved for more noteworthy mold. That's the kind of thing I'm more interested in than whatever kind of joint is in the elbow of the newest whatever and is that your whatever on your whatever shelf. I guess that's what this site is all about, not whatever on whatever.