It's been so long since I've talked about robot bugs that I feel like I owe it too myself as much as I owe it to you all to talk about robot bugs. Not to mention it's been awhile since I've pointed out the whole 'today's more simple toys are throwbacks to older toys' thing I never seem to shut up about. Up above this paragraph is a picture of Beetras, I've made a few posts before about Beetras (follow the tags below to see) and man don't they look great? Just great old school robots from a time that seems forgotten despite it being homaged so much with various high end and regular retail releases. As the Deluxe Insecticons, Convertors, odd bootleg toys, or even in their original release, Beetras are just awesome robot toys. I really wish there was a new Beetras style figure so I wasn't continually living in the past and had something new... wait.. 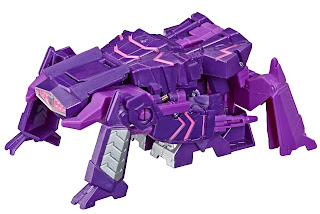 Look at that glorious robotic sci fi beetle. LOOK AT IT. One again the 'simple' sub lines aimed more at younger children comes through with an extremely old school super robot toy. This is the new Cyberverse Shockwave Turbo Changer/ One Step Changer toy. Inexpensive and quick to transform, Shockwave's weird insect alt mode when reduced to a mode simple form looks like a Takatoku toy lost in time. It's not just limited to alt mode either. 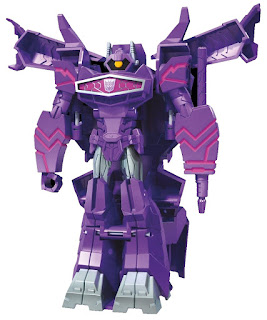 Look at that angry cyloptic menace to the galaxy! Sure it's not exactly a reproduction of the old Beetras, but it's pretty darn close. I wish he came in multiple colors. I can see it in red or green or grey. I want to put a chrome weapon in his hand. Seeings has one hand is already a blaster, maybe a sword. Part of me wants to chrome some of those parts up, but seeing the nature of a Turbo Changers transformation involves lots of folding up... it could scratch off. The similarities are probably coincidental, but I'll take it!