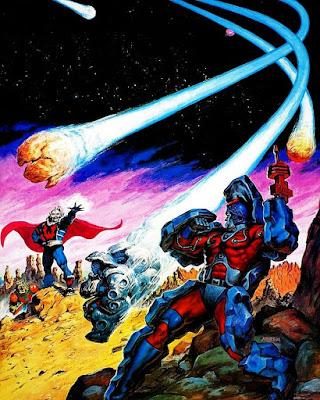 From the planet Geolon to battle on Eternia, the Rock People were a surprisingly cool addition to the Masters of the Universe. You have Stonedar the older wiser member of the duo and Rokkon the... he's basically Hot Rod. The two arrived on Eternia just as He-Man needed a good rock. I've talked about their comrades The Meteorbs here before, but man... I've really been needing to talk about these guys. Because they rock... I'm not going to apologize for that pun. You're just going to have to live with it.


Rokkon and Stonedar didn't make it in time to be on the daily Master of the Universe cartoon, but just like Hordak and his crew, they showed up on She-Ra. My main source of their adventures was in the mini-comics (and I swear the magazine) where they turned up occasionally after starting a village on Etheria. It's funny how something that turns into a rock can be as amazing as these guys (or The Rock Lords for that matter) are, but here I am talking about toy rocks in my 40's, because they were just that cool. Not just mere rock, they were comets that unfolded into metallic skinned aliens with ray guns hell bent on stopping the evil forces of living Halloween decorations that populated Eternia. I certainly cherished my set during their heyday and really wished I had that Matty Collector set.  Right now I hope they make an appearance in the excellent Mega Construx series or pray Super 7 comes through with the goods.