Meteorbs aren't just awkward to say, they're fun for play! 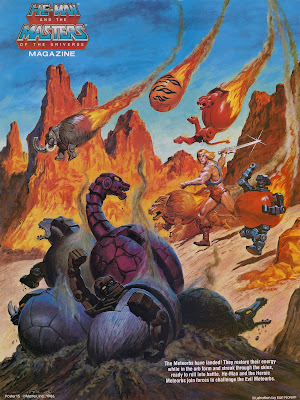 When I was a kid, there was more than one way to rock. There was Rock Lords (which I really need to get a few) and of course the line of meteor based toys in Masters of the Universe. Beginning with Rokkon and Stonedar, later Mattel added in the Meteorbs to fall from the sky and whoop Skeletor's bony butt. Essentially, Transformers were hip daddy-o and He-Man needed to get in on that groovy transforming action. So, Mattel licensed molds from Bandai's Tamagoras toy line of transforming egg robots. It didn't exactly set the Universe on fire (probably because He-Man was still master of the place) unfortunately, but did make for some cool toys.

Bootlegs of the molds are fairly common and other transforming egg toys are pretty common place, so I'm sure they could be dug up easily. I'd like to get my hands on some more, not just because they're cool, but egg bots have always been super neat to me. I've got a neat skeleton one I bought at a pharmacy one year that still holds a special radness rank in my heart.
Bandai egg bots He-Man Masters of The Universe mattel meteorbs robots rokkon stonedar Tamagoras Zone Base