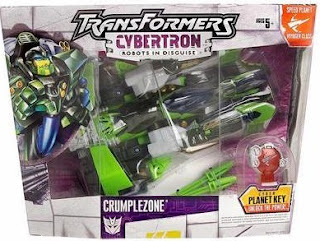 I've been talking about Cybertron lately, and frankly that's a good thing. Cybertron and it's other Unicron Trilogy series were pretty great. They had solid toys with fun gimmicks and a great story line. It was a pretty great time to be a Transformers fan and pretty much the last of the old ways before the movies came along and everything seemingly changed forever (though, it does look like things are slowly reverting).

Crumplezone was always pared with his partner Ransack in the cartoon. They were the standard pair of bozos and Crumplezone was pretty much the typical big dumb guy. Though his toy was hardly typical, in fact it was really cool! Crumplezone's vehicle mode was some sort of rocket powered sci fi race car owing to his home planet of Velocitron (a planet based on race culture), or as noted on his Cyber Planet Key, The Speed Planet.

In robot mode, Crumplezone has a big upper body with long lanky arms. The rocket boosters from his vehicle mode flip over his shoulder with sound effects to fire missiles when activated by his Cyber Planet Key. I really wish he came with some sort of melee weapon and I can really see the brute clobbering somebody with something. With a mix of dark and light green colors, Crumplezone is a really good looking toy.

Remember how I just talked about his flip over the shoulder rocket launchers a minute ago? Well, here's the first part of why I chose to talk about this particular toy today. To the surprise of absolutely nobody, I'm thinking about Halloween. Crumplezone is something of a ghost story of mine. When the toy came out, I lived in an apartment that just always had something weird going on like it was cursed or something. Outlets shorted out, the ceiling leaked once, my PS2 literally died for no apparent reason one night and a week later it's replacement had to be returned after also dying. Really nice apartment, but there was just always something wrong.

My toy room at the time was decked out with various bookshelves that I'd store the bulk of my toys on. I had Crumplezone in a good spot so I could see him (he was new and I liked him!), I'd keep his missile launchers in the locked in position as over his shoulder would cause him to fall over. There was no extra storage for his key, I'd put it in it's port, but not enough to trigger the launchers. With those keys you really had to jam them in to hit the sweet spot, so it worked out usually. At random times, those damn launchers would just flip over and the deploying sound effect would BLARE. Like I said, I didn't have the key in far enough to trigger anything. The catch wasn't super strong obviously, but man when it happened out of nowhere... 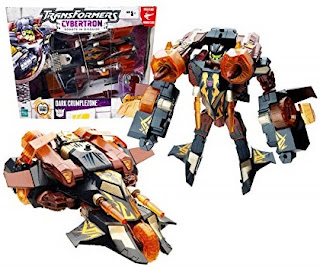 When the time for a repaint came, by some magic, Crumplezone also got a hefty remold. Dark Crumplezone didn't just have new colors, but also new parts! Now more angular with attached fins that made the car look more menacing with a Frankenstein-ish looking robot mode! This might be the other Halloween inspired reason I felt like talking about him, he's a monster! This is without a doubt my favorite version of the toy as it's just gorgeous to look at. The colors and lightening/tribal decals make for one mean looking toy, not to mention the more sharp boxy parts are great! They took a good looking toy and made it 100% better. 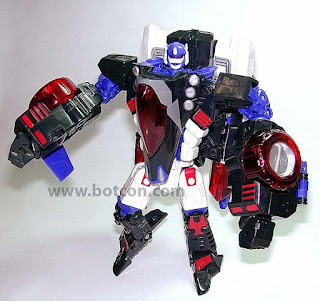 The toy mold got one more use as a BotCon exclusive in 2006. Part of the "Dawn of Future's Past" box set, the original version of the mold was made into a Cybertronian version of Optimus Primal! With a new head and the classic Primal deco, I was surprised by how well this came out. Easily my favorite of the Fun Publications era of exclusives, the box set was themed as the Beast Wars characters right before the start of the show. It's not just my favorite of their work because of how much I love Beast Wars (maybe a little bit), but man they did a really great job! The toys looked amazing and were really imaginative uses of prior existing molds.

It's almost bittersweet though, just as I've said above that Cybertron was the last hurrah of the old ways before the movies. And even though this was only Fun Pub's second BotCon, it was the last one that felt like BotCon to me. While I don't bemoan the movies (I enjoy them, actually) or all the money and attention they brought to the brand. I do miss the older times before them and before everything changed. Not just scope, the overall vibe of Transformers and the Transformers fandom itself hasn't been the same since. Change is the nature of all things, even the theme of the brand, but sometimes you can't help but to wish some things stayed the same.