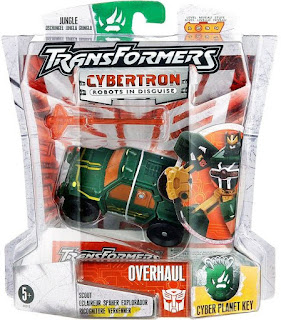 In 2005, Transformers Cybertron graced toy shelves with some pretty neat toys. Overhaul was in the initial shipments of the scout class and was a fast favorite of the line for me. Going with the Cyber Planet Key gimmick of the line, you'll notice that he's representing the Jungle Planet. The Jungle Planet was home to beast based Transformers and even though a jeep/SUV style vehicle would fit in that environment, Overhaul was a bit of a beastly bot on his own with claws, sharp teeth, and some distinct styling. Overhaul was effectively modeled after Wolverine. 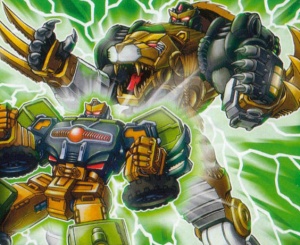 Though that's not all to his Jungle Planet life. Overhaul was changed into Leobreaker, a lion based bot whom fit in among the Jungle Planet even more. You may notice his names don't exactly translate into each other. That's because Overhaul was originally planned to be Trailbreaker. Leo-Breaker, get it? 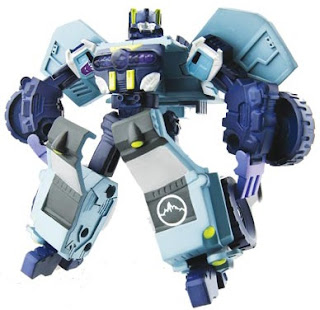 If you guessed the toy mold got a repaint, then you've been paying attention to the franchise for the past 35 years. Not too much long after Overhaul was released, a new Decepticon character using the mold was released named Brushguard. Brushguard was not just a cool blue version of the toy, he was also a botanist! He spends his time researching things like poisonous plant based toxins and how to use them in battle! He's actually working for money to spend on science fiction, what a nerd! Not to mention, Brushguard is actually Overhaul's cousin. Talk about an awkward Thanksgiving! 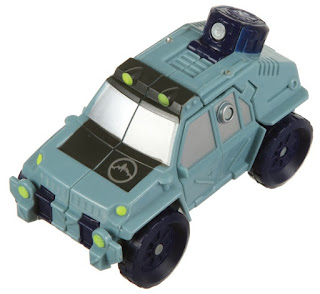 Later when the movie came out in summer of 2007, Transformers fans were treated with a DELUGE of toys! Target featured an exclusive line of basic and scout repaints in movie packaging. While that might sound boring to some of you, it was actually a really neat little line all to itself. The toys would have unique colors and bios expanding the universe of the movie past the handful of bots seen on screen. This lead to a new character using a familiar name-Warpath! 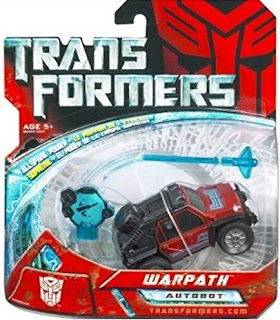 In an attractive red and black with light blue highlights, Warpath is easily my favorite version of the toy. Many of these off screen character types would pop up in movie themed comics where the characters would get into even more adventures. I personally really liked these comics. They weren't just more fiction in the universe, but usually really good too! Part of the fun of the first few movies was all the off screen characters. A mix of new molds and repaints, the toy line was really fun (depending on where you keep sticks on your body). It was so fun that it was easy to overlook the actual movie and focus solely on all the additional product and fiction.

These days the Overhaul mold doesn't get much attention (though Leobreaker's mold got used a million times), and that's a shame. It was a fun little toy that got reused in fun little ways. While I certainly enjoy things like Siege, it's hard not to back at times when Transformers was a little more inventive with it's lines. Something as simple as a repaint got a life of it's own, even if it was just in a few blurbs on the toys package, it was a good few blurbs!