A Landmine on Cybertron 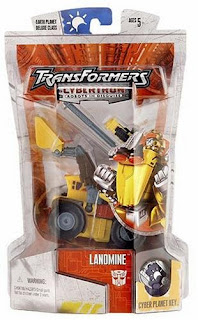 In 2005, the then new Cybertron toy line had a nifty deluxe named Landmine. Presumably the same character from Energon before it, Landmine was an Autobot who transformed into a front loader. Landmine was an instant standout in the line for me as the figure was really good in both modes and just resonated well. Cybertron's main gimmick was the Cyber Planet Keys, which would unlock play features on the figure as well as being available in a multitude of colors and shapes (depending on the planet/faction they represented).

While I didn't mind the keys completely, I was often annoyed in cases where the key would be in the way of the toy in use. This was another good thing about Landmine as his key was out of the way when plugged in activating saw blades in the vehicles wheels. This ultimately just made for a cool looking robot mode more so than a weapon, but it was out of the way for the most part. As a character, Landmine was a seasoned warrior who was used pretty often in the show. A little later in the line saw a Walmart exclusive set of Landmine packed with a Mini-Con with a neat story blurb putting the two in an adventure. The toy was the same however, though this started a trend of the mold used only in exclusives for the rest of it's use. 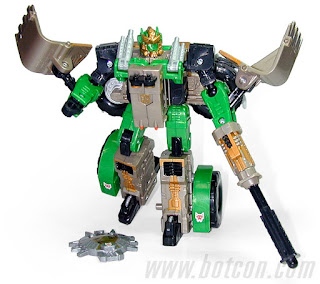 The following year, the Landmine mold was used as a pre-Earth version of Rhinox for the 2006 BotCon exclusive box set. A straight recolor of the toy with his Cyber Key now colored to resemble one of the Golden Disks. I was particularly happy for this toy as not long after the original toy was released I thought it would make a good Rhinox. I guess I wasn't the only one who had that idea and the toy looked great. 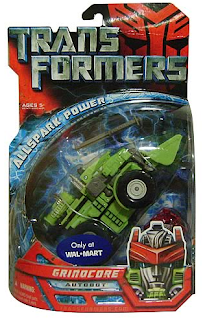 Within a year the 2007 Transformers movie came out and was a big hit. Stores couldn't keep Transformers toys on shelves despite the onslaught of toys being made! It was during this time that in 2008 Walmart got a unique and cool set of exclusives. A new character named Grindcore was made from the Landmine mold. In more traditionally Constructicon colors, Grindcore was an Autobot that was another neat use of a great toy mold. Grindcore was featured in the fun movie based comics that were being produced at the time and is one of those cases where the character's name might be more popular than anything else. Sadly though, this was the last use of the mold, though still pretty remarkable. Usually a toy's various recolors can occasionally get a little bland, the Cybertron Landmine toy's various versions were all pretty great on their own.