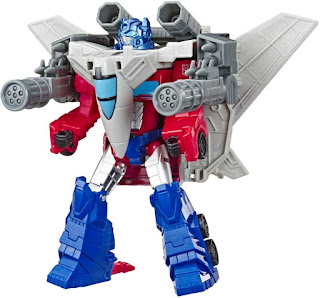 I've been heavily anticipating the upcoming Spark Armor Cyberverse toys. Sure the reaction to Cyberverse has been mixed to say the least, but who cares, they look cool. I've talked about these here before, but as the release draws closer, I'm obviously going to get more excited for these. This kind of thing just screams fun. Not to mention, the potential to make something great is high. 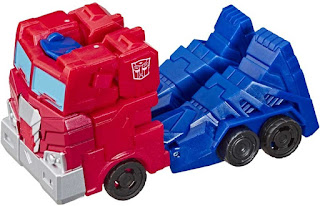 You see, Transformers has a tendency to reuse the toy molds in different colors and usually as different characters. That's relatively normal in toy lines, but with Transformers it's often used to further flesh out ideas and concepts. Random seemingly generic repaints can turn into an obscure character returning to action, or get used in the most crazy ways. The Spark Armor partners also add extra potential. While it's not clear how they could be traded from robot to robot (if at all), something that simple in a repaint could offer up several new ideas. Suddenly Optimus's jet armor paired with the Starscream mold could be a neat new version of Skyquake (assuming the parts can be swapped). 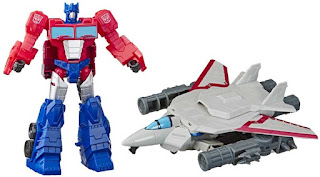 Outside of the obvious incoming repaints, the idea is just plain fun. Ever since God Bomber, adding armor to a Transformer has held a certain appeal to me. I really hope the gimmick gets a good bit of use in the cartoon. The show has been fun enough as is, but something like this can really add something to fight scenes.

at May 15, 2019
Email ThisBlogThis!Share to TwitterShare to FacebookShare to Pinterest
Labels: cyberverse, spark armor, Transformers, Zone Base